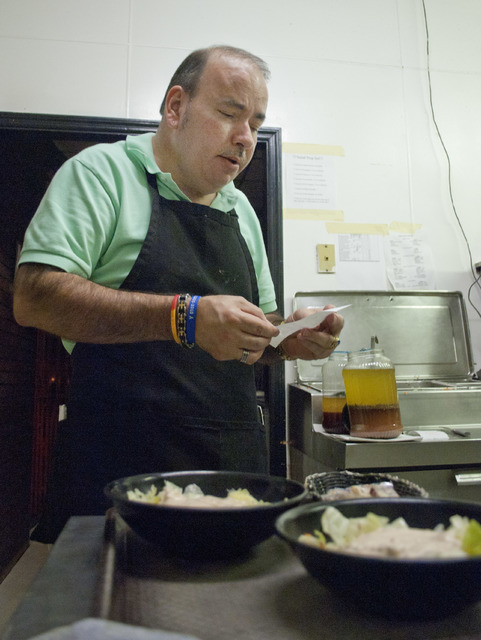 Tommy Bradley, a server at Pizza Villa on Lafayette Parkway, runs food to a table Thursday. Bradley has worked just about every day at the restaurant for 38 straight years.

http://lagrangenews.com/wp-content/uploads/sites/37/2015/11/web1_WEBPizzaVilla01.jpgTommy Bradley, a server at Pizza Villa on Lafayette Parkway, runs food to a table Thursday. Bradley has worked just about every day at the restaurant for 38 straight years. Tommy Bradley takes an order from customer Diane Cannon on Thursday at Pizza Villa. Cannon said she’s known Bradley for 32 years and he’s what keeps her and her husband, Joe, coming back.

http://lagrangenews.com/wp-content/uploads/sites/37/2015/11/web1_WEBPizzaVilla02.jpgTommy Bradley takes an order from customer Diane Cannon on Thursday at Pizza Villa. Cannon said she’s known Bradley for 32 years and he’s what keeps her and her husband, Joe, coming back. Tommy Bradley inputs an order through a computer system on Thursday.

http://lagrangenews.com/wp-content/uploads/sites/37/2015/11/web1_WEBPizzaVilla03.jpgTommy Bradley inputs an order through a computer system on Thursday. Tommy Bradley, a server at Pizza Villa, delivers an order to a table.

http://lagrangenews.com/wp-content/uploads/sites/37/2015/11/web1_WEBPizzaVilla05.jpgTommy Bradley, a server at Pizza Villa, delivers an order to a table. Tommy Bradley checks an order in the kitchen before delivering it to his table.

http://lagrangenews.com/wp-content/uploads/sites/37/2015/11/web1_WEBPizzaVilla06.jpgTommy Bradley checks an order in the kitchen before delivering it to his table.

LaGRANGE — Tommy Bradley arrived to work on Thursday as he’s done many times before.

There was side work to be done, candles to be lit, cash registers to be stocked with counted cash. In many ways, his evening shift at Pizza Villa on Lafayette Parkway was the same as many before it — except for one detail. Thursday, the 49 year old marked 38 years of continuous employment with the oldest Italian eatery in LaGrange.

Donna Bartlett, the owner of Pizza Villa, remembers Bradley as a 12-year-old boy who’d ride his bicycle to the restaurant’s original location in the Commerce Avenue shopping center that now houses a Publix and Goodwill.

“We gave him a job and he’s been here ever since,” she said laughing. “Oh, at first he was a pain. He started out washing dishes and busing tables, and it went from that to cooking, and as soon as he got old enough, he started waiting tables and that’s what he’s been doing ever since.”

On Thursday, a large crowd packed the brick-walled restaurant’s candle-lit dining room as Bradley whirled from table to table, filling glasses, taking orders and delivering food. Somehow, he managed to find time to chat with his customers, exchanging smiles and pleasantries. He carries with him the skill of 38 years on the job, knowing to leave pitchers of sweet tea on empty tables to keep from having to run back and forth to a beverage station — but he’s learned a lot more than that.

“Customers come to see Tommy,” Bartlett said. “Tommy has their food on the table, their drinks and their salads when he sees them coming in the door. I tell everybody if they’re going to change their order, you’d better let him know when they come in the door.”

Diane Cannon and her husband Joe are some of the customers that come to see Bradley.

“We’ve been coming here since they were at the other location way over on Commerce Avenue, probably about 32 years,” Cannon said as she sat at a table near the corner. “I’ve known Tommy since he was a child. He’s the same old Tommy all the time, we just love him. This place would not survive without Tommy.”

In those 32 years of visiting Bradley at the restaurant, she’s made some memories. She remembered one winter evening years ago when it was snowing outside and she’d just had a baby.

“I called him at the restaurant and he was going to deliver our pizza and our movies, because they had movies back then,” Cannon said. “He brought the pizza and movies, stopped by the store and got milk for the baby, and something else for the baby and then he delivered everything. He got a big tip.”

A big tip is what he deserved, Cannon said.

“He didn’t mind stopping and going the extra mile for his customers,” she said. “It’s still that way, he’s the same.”

Bradley has garnered such a following at the restaurant, that when he goes on the occasional vacation, some customers wait to return until he’s back, Bartlett said.

“Everybody likes Tommy, because he’s going to make sure their food is done right,” she said. “He knows what they want and how they want it cooked. When he takes a vacation, people will have to call him and ask what they get to eat because they don’t know — Tommy always has it ready for them. A lot of people, if they know that Tommy’s not going to be here, they won’t come.”

Bradley is modest about the praise his customers and co-workers heap on him. For him, it’s a labor of love, he said.

“I’ve just really enjoyed it,” he said of his job at Pizza Villa. “I lost my family when I was real young and Donna and her husband, before he passed, were like my stepparents. I think of them like mom and dad since I lost mine so early — and then my customers are my biggest thing. They’ve been good to me.”

Although Bradley’s worked at the restaurant for 38 years, it’s not the only place he’s worked. For several years, he owned a pair of convenience stores.

“When my parents died, they used to help me at both stores, and I realized I couldn’t do this and those two convenience stores too,” he said. “After I got robbed at one of my businesses, I decided to sell those and just focus on one job after 32 years.”

Bartlett and Bradley’s co-workers are glad he decided to stick around with Pizza Villa.

“He’s part of the family,” Bartlett said. “I hope I don’t ever have to replace him.”