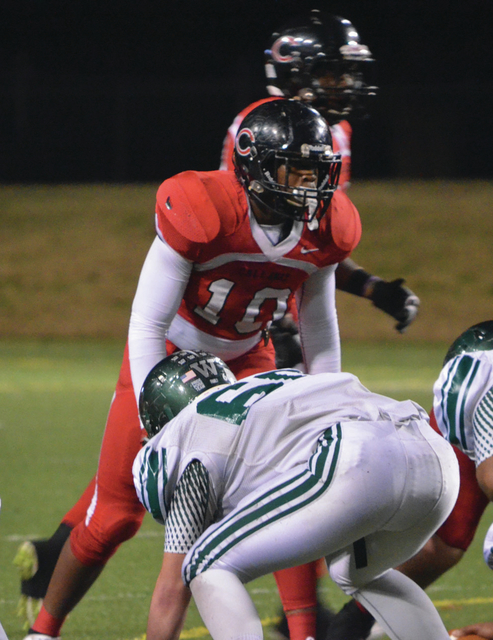 Defensive lineman JT Wortham, who had a huge game, gets in position before a snap. Kevin Eckleberry | Daily News

http://lagrangenews.com/wp-content/uploads/sites/37/2015/11/web1_CHS9.jpgDefensive lineman JT Wortham, who had a huge game, gets in position before a snap. Kevin Eckleberry | Daily News

LAGRANGE – They were rolling.

After spotting the Westminster Wildcats a 24-7 halftime lead, the Callaway Cavaliers came storming back in the second half, and they were within seven points when Cedric Maynard scored with 8:24 left in the game.

The defense then forced a three-and-out, and the Cavaliers were just a touchdown and an extra point away from tying it.

Momentum was squarely in the Cavaliers’ corner at that point.

Things were about to change in a big way, though.

Westminster recovered a fumble, and it scored a touchdown a few plays later to take a 14-point lead.

The Cavaliers fumbled again on their ensuing possession, and the Wildcats added one more touchdown to put the finishing touches on a 49-28 victory in the second round of the Class AAA state playoffs.

It was a difficult ending to an enormously successful season for the Cavaliers, who finished with a 10-2 record while winning a region championship and one game in the state playoffs.

“Sometimes, when you play in big games, things don’t always go your way,” Callaway head coach Pete Wiggins said. “I’m so proud of these kids. We had a lot of things not go our way, and they never quit fighting. They showed the same character they showed all year. That’s a never-give-up mentality. We just made some mistakes that we couldn’t overcome, but you’ve got to learn from it.”

It was the final game for an outstanding group of seniors who accomplished a great deal during their four years in the program.

The Cavaliers scored first in the game, driving 80 yards for a touchdown on their opening possession, with Maynard scoring from two yards out, but the rest of the half belonged to the Wildcats, who took a 24-7 lead to the locker room.

The Cavaliers were a long way from done.

After the defense got a stop to start the second half, quarterback Braylon Sanders’ 50-yard touchdown run and the extra point by Noah Stephens cut Westminster’s lead to 24-14 with 9:34 left in the third quarter.

Westminster went back on top by 13 when Blake Gillikin boomed a 52-yard field goal with 4:47 to play in the third quarter.

Back came the Cavaliers, who went 80 yards for the score.

Maynard, who had a remarkable senior season, capped the 10-play drive with a 5-yard scoring run, and the Stephens extra point cut Westminster’s lead to 27-21 with three seconds left in the third quarter.

The Cavaliers thought they’d regained possession when defensive lineman Rashawn Lovelace recovered a fumble, but the Westminster running back was ruled down before he lost the ball.

On the next play, Rankin Woley threw a 62-yard touchdown pass to Joe Egan, and after a two-point conversion, the lead was 35-21.

Once again, the Cavaliers had an answer.

After Sanders completed a clutch 18-yard pass to Joe Brown on fourth down, Maynard had a 3-yard touchdown run, and Westminster’s lead was 35-28 with 8:24 to play.

After Westminster was forced to punt, Callaway took over at its own 25-yard line.

Two plays later, the Cavaliers fumbled, and Keller Harper scored on a 4-yard run, and the Wildcats led 42-28 with 5:01 to play.

The Cavaliers made it to the Wildcats’ 32-yard line on their next possession before the lost another fumble.

Westminster drove down the field, and Harper’s 5-yard run with 2:25 to play put Callaway in a 21-point hole.

Callaway got to the Westminster 30-yard line when the game ended.

In the first half, Westminster got touchdown runs of seven, three and 31 yards from Zay Malcome, and Gillikin had a 43-yard field goal.