A night without a roof 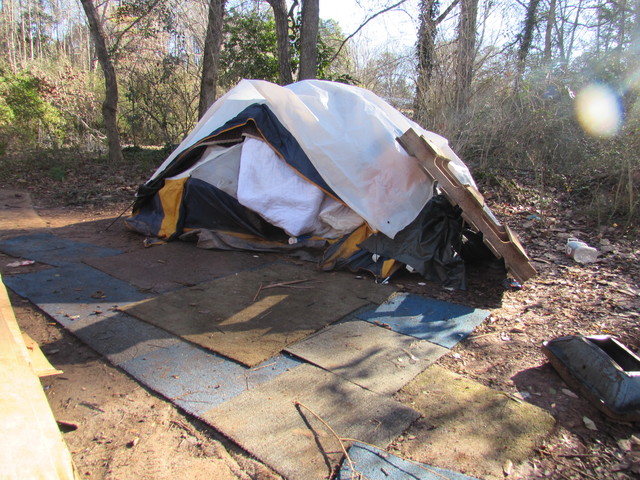 Carol Patterson of LaGrange was living on the streets by the time she was 14 years old. She said she was homeless off and on for 10 years throughout her life.

http://lagrangenews.com/wp-content/uploads/sites/37/2015/11/web1_WEBEmmaus1.jpgCarol Patterson of LaGrange was living on the streets by the time she was 14 years old. She said she was homeless off and on for 10 years throughout her life. After living in the Emmaus Women’s Shelter, Patterson said she has been given a fresh start. She recently met a man she called, “the love of her life.” They are getting married on Dec. 3 and moving into a home of their own.

http://lagrangenews.com/wp-content/uploads/sites/37/2015/11/web1_WEBEmmaus2.jpgAfter living in the Emmaus Women’s Shelter, Patterson said she has been given a fresh start. She recently met a man she called, “the love of her life.” They are getting married on Dec. 3 and moving into a home of their own. A homeless camp, one of many, sits in a wooded area in Troup County. The Troup County Homeless Coalition hopes to engage the community in learning what it is like to be homeless for just one night in the A Night Without a Roof event 4 p.m. Dec. 4 on Lafayette Square.

http://lagrangenews.com/wp-content/uploads/sites/37/2015/11/web1_WEBNightWithoutRoof.jpgA homeless camp, one of many, sits in a wooded area in Troup County. The Troup County Homeless Coalition hopes to engage the community in learning what it is like to be homeless for just one night in the A Night Without a Roof event 4 p.m. Dec. 4 on Lafayette Square.

LaGRANGE — Carol Patterson started living on the streets when she was 14 years old after she said she was molested by three different family members.

Patterson turned to a life of prostitution but still found herself cold and alone.

“I’ve been living on the streets off and on for 10 years prostituting myself,” she explained. “That’s how I made it. I would focus on truck stops and truck drivers. They fed me and gave me rest. If not, then I slept under a bridge … anyway to survive.”

She eventually started drinking and abusing prescription pills. Patterson said she was 30 years old when she was first introduced to crack cocaine.

The lure of using drugs and getting high was also what led Joseph Davidson from being a member of a prominent family to an addict sleeping on a park bench.

“I had a nice family, a nice house. Then I started using drugs,” Davidson explained. “I slept on the side of the road, in the bushes, where ever I could, without getting in trouble with the police.

“I went to soup kitchens to eat,” he continued. “I washed my clothes in a creek and hung them up to dry. I bathed in the creeks.”

Davidson said he met Jessica David, executive director of the Emmaus Shelter, about a year ago. He has been clean and sober for seven months, he stated.

Being homeless is a life Davidson and Patterson lived for days, weeks and months at a time.

The Troup County Homeless Coalition hopes to engage the community in learning what it is like to be homeless for one night in its inaugural A Night Without a Roof event.

“It is our wish that it helps bring awareness to our community about the struggles of those who are homeless and of our shelters,” explained Denná Muncy, chairwoman of the Troup County Homeless Coalition. “We hope it will open the eyes, hearts and arms of our community to be to reach out and help someone in need.”

She said TCHC is challenging folks in Troup County to join them Dec. 4 starting at 4 p.m. on Lafayette Square.

Folks pay $25 for a “plot” of land inside the square where they will build their own “home” out of cardboard boxes. Participants must bring their own boxes, said Muncy.

With the help of the Circles of Troup, folks will learn the next steps on their journey, including the challenges the homeless face like being given canned food to eat for a meal.

“We love the fact that people donate canned goods, but sometimes people forget that homeless folks don’t have can openers,” Muncy explained. “So that might be one of the challenges for participants at the event that night. We’ll take them through that.”

They will also hear testimonies from folks who have called the streets their home at some point in their lives, plus watch a documentary on the homeless problems and hear from guest speakers on some solutions on how to fix it.

There will be bands playing live music on the square that night as well, Muncy said.

The $25 dollars will pay for dinner, snack, and breakfast the following morning that will be prepared by the local church On A Mission for Christ.

Muncy said people can participate in the event even if they do not plan to spend the night in the square.

In addition, the Troup County Homeless Coalition will hold a blanket, hat, glove, sock and can opener fundraiser that night, along with a food drive, so they prepare homeless folks for the coming winter months.

Both Patterson and Davidson are very supportive of A Night Without A Roof.

Davidson believes the event will open the community’s eyes to how big the homeless problem is in LaGrange and how easily it could happen to them.

“While I was living the good life, I had no idea there was even a homeless situation in our community,” he said.”It’s the things that are taken for granted — I have a home to go to, I have food, I have a bed to sleep in and a light switch with electricity. But at anytime, it can be taken away. It can happen to anyone, at any time.”

“It’s not about money, just sit down and have a word with them. The need is that they (homeless) know that someone is there, someone to talk to and someone who cares,” Davidson said.

“Or someone to hug,”Patterson added. “There were many days when I was out on the streets and I wished there was someone to just give me a hug … If I had someone who just stopped and talked to me, I might not have lived on the streets as long as I did.”

Both Patterson and Davidson said they plan to attend the event on Dec.4 to give folks their first hand accounts of what being homeless truly means 24 hours a day, 365 days a year.

“I think people see us as bad people. But we’re not. We have good hearts,” Davidson said. “Yes, we may have put ourselves in these situations, but we’re trying to get on the right track, work and better ourselves.”

“There are people who are hurting, who are crying out who need help,” Patterson said. “Thanks to Miss Shirley (Andrews) and Miss Jessica (David), I forgave myself. I forgave others. I gave it all to God.”

It has been a fresh start for Patterson since moving into the Emmaus Women’s Shelter. She said she met the love of her life and will be getting married on Dec. 3.

The couple will also be moving into a home of their own after the wedding.

Anyone interested in participating in the A Night Without A Roof event or just wanting more information can visit the Troup County Homeless Coalition website at www.tchomeless.com, go to their Facebook page or call Denná Muncy at 762- 822-1712.