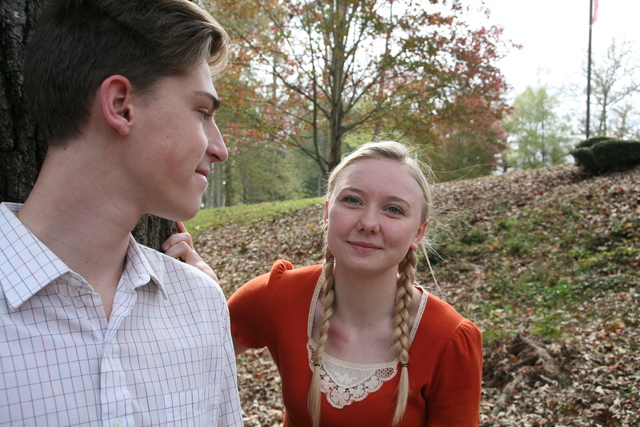 Eli Grant as Robert and Sarah Thompson as Eva portray outcasts who are friends in LaGrange College Theatre’s production of ‘The Rimers of Eldritch.’

http://lagrangenews.com/wp-content/uploads/sites/37/2015/11/web1_WEB1123Rimers.jpgEli Grant as Robert and Sarah Thompson as Eva portray outcasts who are friends in LaGrange College Theatre’s production of ‘The Rimers of Eldritch.’

LaGRANGE — Rime, a frost that covers everything it touches, often distorts what is underneath. Many of the characters of LaGrange College Theatre’s upcoming play, “The Rimers of Eldritch,” cover and mask the truth, making them the “rimers” of the play, said Kim Barber Knoll, head of the theater arts program and director of the play.

“The town of Eldritch is filled with secrets and lies,” she said. “Things are never what they seem, and the truth is revealed very carefully and cleverly throughout the play. Lanford Wilson’s overlapping dialogue and sequencing gives the play its own ‘music’ through the text and voices of the characters.”

The award-winning play will be presented at 7:30 p.m. Dec. 2-5 in Price Theatre, with an additional show at 2:30 p.m. Dec. 5. The production contains mature language and content.

Connor Lynch, a senior art history and museum studies major, said truth is at the heart of the play.

“Truth is a lot like frost,” she said. “You can still see things through it, but what you do see isn’t crisp and clear. There are pieces of the truth there, but they are distorted. Everyone has a side they don’t show to the rest of the world, something dark they don’t want others to see.”

“From beginning to end, it builds on itself,” he said. “There is never a dull moment, and by the end you are amazed at everything that has happened in this small town.”

Mariah Bowen, a junior musical theater major, plays one of the town gossips.

“Wilma and her best friend Martha are the points of view for Eldritch, a town that is clearly dying,” she said. “They talk about how great it used to be, but now it’s in shambles.”

Although the play is set in the 1960s, its themes are timeless, said Sarah Thompson, a freshman theater performance major.

“Issues like gossip, acceptance and outcasts in small-town America are still current today,” she said.

Understanding the life of a pariah was difficult for senior Lawrence West, who plays Skelly, the town hermit and a scapegoat for Eldritch’s evils. But one rehearsal brought everything home for him.

“I started really listening to all the horrible things the other characters were saying about Skelly,” said Lawrence, a musical theater major. “I realized that he knew nobody liked him, and he heard all the things the townspeople said about him. I just had to imagine what that felt like.

“But Skelly also knew everything that happened in that town. He was the voice of truth.”

Barber Knoll is directing the production with the help of senior Meagan Thompson as assistant director.

“Meagan has been outstanding,” Barber Knoll said. “She has an excellent eye and very good intuition.”

In fact, the director said Thompson’s rehearsal notes were often the same as her own.

“It’s wonderful to have an assistant director with such good instincts,” Barber Knoll said. “We have worked in tandem many times. Meagan has worked scenes upstairs in the lab while I’m working on the main stage.”

Thompson said she is grateful for the chance to test her directing skills.

“I took a directing class last year and I loved it,” she said. “I mentioned to Professor Knoll that I’d love to direct something and she said, ‘That’s good to know.’ I was thrilled when she asked me to work with her on this show. What an amazing opportunity, and I am learning so much.”

The cast was quick to praise Thompson’s efforts.

“Meagan and I started here at LaGrange at the same time,” said West. “To see her apply what she’s learned in class and in her roles on stage has been amazing.”

As a freshman, Grant said it’s exciting to see a classmate working as a director.

“That could be me in four years,” he said. “If I learn what Meagan has learned and know what Meagan knows, maybe I could direct something later. She is such an inspiration.”

“The Rimers of Eldritch” runs Dec. 2–5 with shows nightly at 7:30 p.m. and an additional matinee at 2:30 p.m. Dec. 5. This play contains mature themes and language. Tickets are $10 for adults, $8 for senior citizens, 55 and older, and non-LC students, and free for LC students, faculty and staff.

Tickets may be purchased by calling 706-880-8080 or emailing priceboxoffice@lagrange.edu. If emailing or calling, please leave name, the performance date/time and number of tickets desired, type of tickets and a call-back number and email address for confirmation.

The box office is currently closed for Thanksgiving holidays until Nov. 30 and will be open noon until 4 p.m. weekdays.