Tough ending to a special season 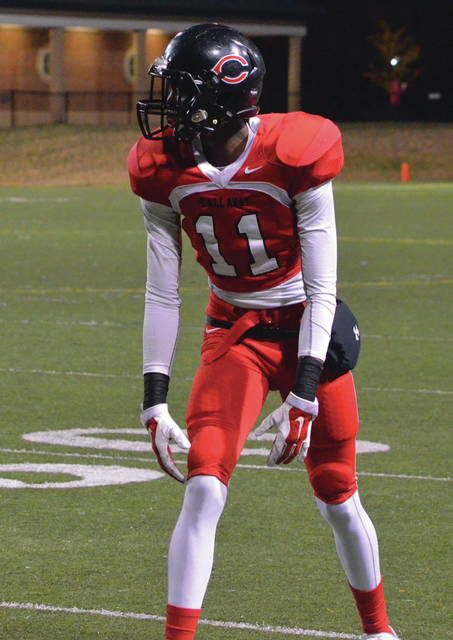 The Callaway Cavaliers charge onto the field before Friday’s state-playoff game against Westminster. Callaway’s season ended with a 49-28 loss. Kevin Eckleberry | Daily News Callaway defensive lineman JT Wortham celebrates after making a play in the second half of Friday’s loss to Westminster. Kevin Eckleberry | Daily News

http://lagrangenews.com/wp-content/uploads/sites/37/2015/11/web1_CHS82.jpgCallaway defensive lineman JT Wortham celebrates after making a play in the second half of Friday’s loss to Westminster. Kevin Eckleberry | Daily News LAGRANGE – The journey is over.

The Callaway Cavaliers didn’t anticipate packing up the equipment this early in the playoffs, but in sports, the script rarely goes according to plan.

The Cavaliers fought back from a large halftime deficit to make things interesting in Friday’s second-round playoff game against Westminster, but they were unable to overcome their own mistakes, as well as a talented opponent.

With the 49-28 loss, an exceptional season came to a close for the Cavaliers.

The Cavaliers went 10-2, won a third region championship in four years, and reached the second round of the playoffs.

No one was satisfied, though.

This was a group that felt it was capable of advancing deep into the playoffs, and perhaps landing a spot in the state-championship game in the Georgia Dome.

The Cavaliers came into Friday’s game having won 10 consecutive games, and they delivered a dominant performance in a 38-20 win over a strong Hart County team in the first round of the playoffs.

Then against Westminster, Callaway put together an 80-yard touchdown drive on the first possession of the game to jump out to an early 7-0 lead.

The Cavaliers, it appeared, were going to keep right on rolling.

That was about the only first-half highlight for the Cavaliers, though.

Westminster, taking advantage of the excellent field position, scored 24 unanswered points after Callaway’s touchdown to seize a 24-7 lead at the half.

The Cavaliers got as close as six points in the third quarter, and they were still within seven with less than six minutes to play in the game, but they were done in by two lost fumbles that led to two late Westminster touchdowns.

Coaches always stress the importance of winning the turnover battle in big games, and the Cavaliers gave the ball away four times.

“At this level, when you everybody’s good, you can’t turn the ball over like that,” Callaway offensive coordinator Matt Napier said.

It was a difficult ending to the latest in a long line of extraordinarily successful season for the Cavaliers, who have become a consistent powerhouse under head coach Pete Wiggins.

Wiggins, who guided the Cavaliers to at least one playoff win for the seventh time in eight years, told his players after the game how much he appreciated everything they gave.

“When you put as much work as these kids put into it, it always hurts,” Wiggins said. “I love them. They’re a bunch of winners.”

It was the end of a road for a group of seniors who had a remarkable four years.

From 2012 to 2015, the Cavaliers had 39 wins, they captured three region championships, and they won six playoff games, including three in the 2013 season when they reached the state semifinals.

One of the seniors who has been a part of that success is running back Cedric Maynard, who completed his high-school career by running for 114 hard-earned yards on 30 carries with three touchdowns.

Maynard made the most of his one and only season as a starter.

“My mindset was to achieve my goals, just see what I can do,” Maynard said.

Another senior, defensive lineman JT Wortham, had a dominant game, spending a lot of time in the Westminster backfield while making multiple tackles for loss.

It wasn’t a storybook ending for those seniors, and the team as a whole, Wiggins said the final game was another example of the never-say-die attitude of the players.

“They showed the same character that they’ve shown all year, and that’s a never-give-up mentality,” Wiggins added.

The Cavaliers showed that fight in the second half.

Trailing 24-7, Callaway set the tone right off the bat in the second half.

On the opening kickoff, Wortham made a huge hit on the return man.

Worthm added a sack on second down that forced Westminster into third-and-long, and it ended up punting.

Two plays later, quarterback Braylon Sanders took off on a 50-yard touchdown run, and the Cavaliers were within 10.

On Westminster’s ensuing possession, Wortham made another tackle in the backfield to create what appeared to be another third-and-long situation.

Wortham was flagged for a facemask penalty, though, even though it appeared he didn’t make contact with the helmet.

The penalty stood, and Westminster’s Blake Gillikin boomed a 53-yar field goal, and Callaway was behind by 13 points.

The Cavaliers responded with their second 80-yard scoring drive,, and this one was capped by a Maynard 5-yard scoring run.

Noah Stephens made his third of four extra points, and Callaway was within six with three seconds left in the third quarter.

Early in the fourth quarter, it looked like Callaway had made a huge, potentially game-changing defensive play

A Westminster played fumbled the ball, and Callaway defensive lineman Rashawn Lovelace made the recovery.

The officials huddled and determined that the ballcarrier was down before he lost the ball, though, so Westminster maintained possession.

Once again, despite facing some major adversity, the Cavaliers kept fighthing.

Callaway drove 57 yards for a touchdown, and it was Maynard finishing things off with a 3-yard touchdown run, and with 8:24 to play, Westminster’s lead was 35-28.

The key play on that drive was an 11-yard completion from Sanders to Joe Brown for a fourth-down conversion.

Callaway’s defense then made a huge stop and forced a punt.

With 6:36 left in the game, the Cavaliers had the ball at their own 25-yard line only down by seven points.

That’s when the turnover bug reached up and bit the Cavaliers at the most inopportune time.

A fumble on second down gave the ball to back to the Wildcats, and they scored moments later to go up 42-28 with 5:01 left.

The Cavaliers still had hope at that point.

If they could drive down for a quick score, they could still stop the clock with their three timeouts and possibly get the ball back in time to score again.

That hope would soon be extinguished, though.

The Wildcats recovered a fumble with about four minutes to play, and they scored the game-clinching touchdown with 2:25 to play.