‘His last words to me were “I love you”’ 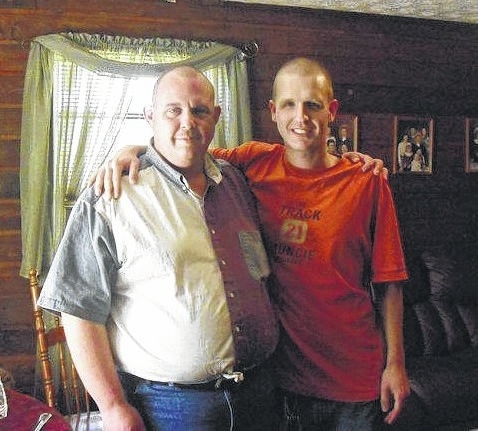 Jerry Lee Folds, 38, left, stands next to his partner of seven years Trevor Moulder. Folds was murdered in March by Christopher Rice, 20, of LaGrange. Moulder said Folds loved going to church, loved helping people out and would never hurt anyone.

http://lagrangenews.com/wp-content/uploads/sites/37/2015/11/web1_JerryTrevor.jpgJerry Lee Folds, 38, left, stands next to his partner of seven years Trevor Moulder. Folds was murdered in March by Christopher Rice, 20, of LaGrange. Moulder said Folds loved going to church, loved helping people out and would never hurt anyone. LaGRANGE — Trevor Moulder, 30, had big plans for the holidays this year.

He and his partner, Jerry Lee Folds, 38, were to celebrate Thanksgiving and Christmas with Moulder’s sister, a gathering the three did not get to have very often.

Sadly, those plans radically changed March 20 when investigators with the Troup County Sheriff’s Office said Folds was stabbed 30 times in the neck and murdered at a campsite off Hammett Road. His killer, Christopher Rice, 20, was captured two days later at his home on Greenville Street.

Rice pleaded guilty last week to the malice murder of Folds and was sentenced to life in prison with the possibility of parole.

But that plea has brought little comfort to Moulder.

It has been a year of “firsts” for Moulder as he learns how to live without his partner of seven years. But he made it clear he did not want Folds’ legacy to be as a murder victim.

“He was a very loving person,” Moulder explained. “He loved going to church, loved helping out, was always helping people out and would never hurt anyone.

“We liked going out and seeing his family. His family loved me too,” he continued. “I was there for him, always helping them out.”

Moulder said he and Folds were well known and well liked as a couple at their respective jobs at Kia and Daehan Solution, plus in Franklin, where the pair shared a home.

“He was the first love of my life … the first serious one,” Moulder explained. “My sister loved him; my nephew too … While we were together he became an uncle. He loved his little nephew a lot.”

And, Moulder said, he always kept in touch with his family, which is how Moulder knew something happened to Folds the night of March 20, when he never returned his calls or text messages.

“I spoke to him that Friday afternoon and he told me he was bringing a coworker home … I didn’t want to say OK, but I did,” Moulder explained. “Then I called him back and reminded him his grandmother called and wanted some tomatoes. His last words to me were, ‘OK! I love you.’”

Moulder said Folds’ body was found on Hammett Road, not far from where his grandmother lived.

According to Moulder, there were tomatoes inside his car.

Moulder said he was glad to finally confront his partner’s killer at sentencing.

The 30 year old gave a victim impact statement to the court while holding up a picture of Folds. He was standing just feet away from Rice, who was bound and shackled. The suspect also smiled through almost his entire court appearance.

“You were just gay bashing, that’s what you were doing,” Moulder said to Rice during the Nov. 16 trial. “… Yeah, you’re smiling alright … you don’t give a damn. … You destroyed everything. Burn in hell, buddy.”

Moulder wished Rice received more time behind bars, without the possibility of parole.

“He wasn’t sorry about what he did,” Moulder said. “He took Jerry’s money, stabbed him and took his life.”

Moulder said he is grateful for all the support he received following the news of Folds’ death from friends, colleagues and law enforcement officers.

“I just want to thank the Franklin Police Department, the Troup County Sheriff’s Office and the (Troup County) District Attorney’s Office for all the hard work they did,” he said. “I also want to thank everyone that was there for Jerry and what they did for him.”

Moulder said now he is trying to pick up the pieces of his life, while still remembering and honoring his best friend and his partner.

“I go by his grave … talk to him … see how he’s doing,” Moulder stated. “But he’s never going to be replaceable.”

Moulder planned to apply for either the local police or fire department this year, but put it off after Folds’ death.

He said he may try again in 2016 in honor of his partner.

“He was trying to help me get ready … put me in touch with the right people,” Moulder said. “I think he would be so proud of me.”