It’s a perfect start for Grangers 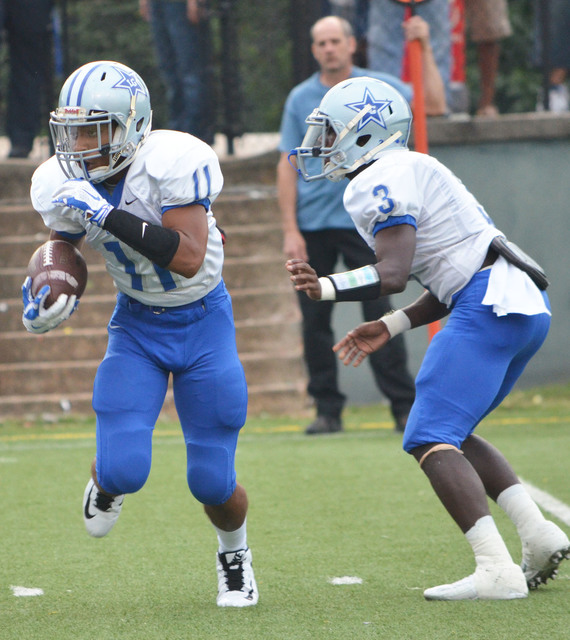 JONESBORO – When he gets going, when he finds his range, LaGrange High’s Derieko Smith is hard to stop.

The senior guard showed that often a year ago en route to being named the Region 1-AAAAA player of the year while helping the Grangers win a region title and reach the quarterfinals of the state tournament.

On Tuesday night, Smith once again showed how explosive he can be.

In a road game at Mundy’s Mill, Smith went off for 36 points to lead LaGrange to an 87-72 victory.

The Grangers improved to 2-0 on the young season, and both wins have come on the road.

LaGrange opened its season with a win over Newnan on Monday.

“You get into region play, you’re going to play back-to-back games, and it could be back-to-back on the road, so we went to Newnan and then we had to go to Mundy’s Mill, all in a 24-hour time period,” LaGrange head coach Mark Veal said.

Russell is in his first season at LaGrange after transferring from Troup High.

“We gave Bo a shot tonight because this team we’re playing is pressing and Bo’s pretty good at getting to the rim and taking care of the ball, and he came in and did a nice job,” Veal said.

The game was tied 11-11 after the first period, and LaGrange scored 29 points in the second quarter to take a 40-33 lead at the half.

The Grangers led 59-49 through three quarters, and they scored 28 points in the final period to make sure there wouldn’t be a comeback.

The Grangers, coming off a special season that ended with a close loss to Allatoona in the elite eight of the Class AAAAA state tournament, are off to a fast start this season.

It helps to have a player like Smith in the fold.

There are a handful of players getting their first major taste of varsity action, but Smith is a veteran, and Veal is glad to have him.

“Derieko is wonderful,” Veal said of Smith, who was also a standout defensive back and wide receiver in football. “He loves football, he loves basketball. He’s just a great kid, a great player.”

While LaGrange lost some key seniors from last year’s team, Smith believes this team can accomplish big things as well.

“I really think this team is better,” Smith said after last week’s preseason win over Central-Carroll. “I think we can do a lot of things.”

The Grangers should become even more explosive when senior LaPerion Perry returns from an injury he suffered while playing quarterback for the football team.

Last season, Smith and Perry provided a dynamic combination at the guard position.

As important as Perry is to the the team’s long-term plays, Veal said the plan is to be patient with him.

“He’s eager to get back,” Veal said. “He had an injury over the summer, and now he’s got this. It’s good for him to rest. We don’t need to rush him back. We need him healthy.”

LaGrange will make its regular-season home debut on Tuesday against Woodward Academy.