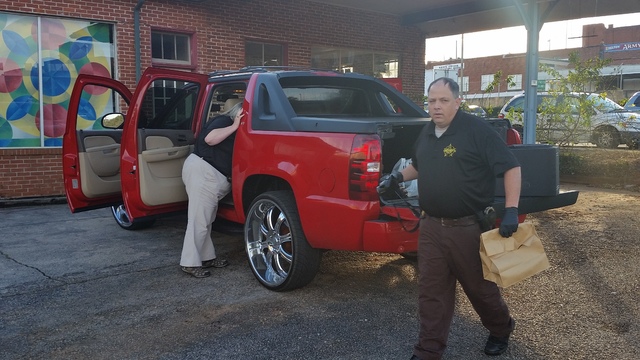 William Casey Dean, 41, of LaGrange and Nefertiti Iesha Green, 31, with addresses listed in LaGrange and Lanett, Alabama, were arrested near the intersection of Greenville and Morgan streets just after 3 p.m.

TCSO Chief Investigator Mike Caldwell said an LPD officer spotted the bright red Chevy Avalanche the couple were riding in on Greenville Street less than 30 minutes after the sheriff’s office issued a lookout for the vehicle.

LPD immediately pulled the truck over and TCSO deputies met them at the scene where they took Dean into custody for violating a temporary protective order.

After allegedly giving police officers fake names, Green was also arrested for a probation violation, according to a police report.

Officers said they smelled marijuana coming from Green, which she finally confessed she was holding inside her pants along with four individual zip lock bags containing methamphetamines that weighed a total 100 grams.

Caldwell said the couple was wanted for numerous crimes that occurred around the county and city, starting with a dispute inside Walmart on New Franklin Road with another man that led to them allegedly participating in a robbery and stealing a car from the store.

According to Caldwell, Dean then continued to harass the same person he confronted inside Walmart and Monday allegedly shot into the person’s home on Weathers Drive. No one was inside, but the residence was seriously damaged, Caldwell noted.

He said deputies and officers found a loaded semi-automatic pistol, consistent with the caliber of weapon used in the earlier shooting in Troup County, inside the vehicle. Investigators also seized numerous rounds of ammunition, added Caldwell.

They said more charges against Dean could be forthcoming.