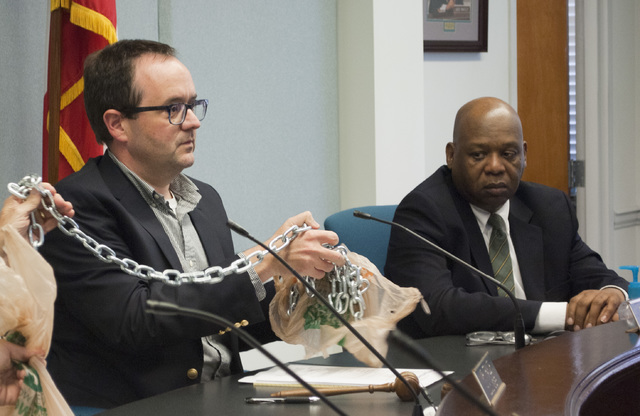 Chuck Conerly addresses City Council on Tuesday representing a group of homeowners who are concerned about a road project to connect Vernon Road with Cameron Mill Road.

http://lagrangenews.com/wp-content/uploads/sites/37/2015/11/web1_WEBCityCouncil.jpgChuck Conerly addresses City Council on Tuesday representing a group of homeowners who are concerned about a road project to connect Vernon Road with Cameron Mill Road.

LaGRANGE — Homeowners in northwest LaGrange on Tuesday continued to press city officials for answers on a proposed connector road slated to run from Vernon Woods Drive near the hospital to Cameron Mill Road.

Residents, many of whom live in the Highland Country Club community, are suspicious of the city’s plans to build the road, claiming it would eventually lead to a second road that would be part of the city’s bypass and run directly through their neighborhood.

Both Tom Hall, city manager, and David Brown, the city’s chief roads engineer, have denied that claim and said there are no plans for such a secondary road through the country club. Those reassurances don’t seem to be enough for the homeowners, who have hired Carrollton-based attorney Chuck Conerly to represent them.

“Our concerns are both with the project itself and the process under which the project has been undertaken,” Conerly told City Council at its regularly scheduled meeting Tuesday.

In August, James Emery, the county’s roads engineer, addressed City Council and showed members the proposed project. Meeting minutes reflect that council members took no action regarding the road, but “there have been substantial land-disturbing activities on the property, along the path that seems to be consistent with the proposed road,” Conerly said.

Hall told the Daily News last week that the city has hired a surveyor to stake the center line of the road and the boundaries of the right of way. The Callaway Land Trust, which owns the majority of the land where the connector road would run, is slated to donate the right-of-way land and $2 million of the estimated $4.5 million project.

Logging has already begun within the boundaries of the right of way, and Hall said the removal of the timber is on private land and its removal is not a city operation.

The U.S. Army Corps of Engineers sent a letter to the county through Emery on Oct. 30 and alleged possible violations of the federal Clean Water Act from heavy vehicles crossing at least two streams during the logging operations. The corps is investigating the allegations, the letter said.

The county punted the letter to the city, which is overseeing the project, although the funds for its completion will come from countywide special-purpose, local-option sales tax revenue.

The public-private partnership between the Callaway Land Trust, the city and the county is raising eyebrows.

“Why would someone give land and millions of dollars unless they expect to get a return on their investment?” Conerly asked. “Is this a case where public money is being used for private benefit?”

The land in question is about 1,700 acres of undisturbed forested land that sits south of Cameron Mill Road and north of Vernon Road. The Troup County tax assessor’s office values the land, which is divided into two parcels, at a total of $7.1 million. Callaway Lake, which feeds into West Point Lake, sits on the property.

Conerly alluded that the pristine land could be developed in the future at considerable gain for the owners of the property.

Hall and Brown said the city has received no plans from the land owner indicating such a development might occur, and one of the properties is currently zoned agricultural, according to tax records.

Almost a decade ago, the city proposed a similar road, Conerly said. The residents of the country club area also fought that road, and their opposition eventually led to the project being scrapped, he said.

“If the city wants another fight, we’re prepared to give them one,” he said.

Councilman Tom Gore, who was acting as mayor pro tem in the absence of Mayor Jim Thornton, told Conerly that city officials were not in a position to discuss the proposed road and residents’ complaints in a public forum, but confirmed that City Council has not taken any formal action on the project.