The program’s come a long way 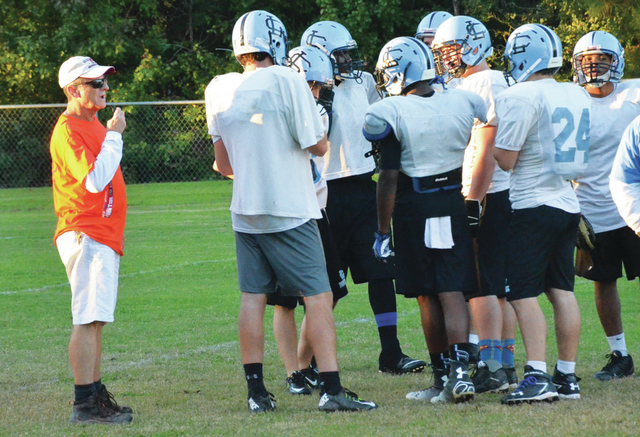 Nick Nehrhing, who was the Lafayette Christian School head coach for the first seven years of the program’s existence, is serving as an assistant coach this season. He’s proud to see how far the program has come. Kevin Eckleberry | Daily News

http://lagrangenews.com/wp-content/uploads/sites/37/2015/11/web1_cougars4.jpgNick Nehrhing, who was the Lafayette Christian School head coach for the first seven years of the program’s existence, is serving as an assistant coach this season. He’s proud to see how far the program has come. Kevin Eckleberry | Daily News LAGRANGE – He remembers those early days.

When Lafayette Christian School decided to begin a football program in 2008, Nick Nehring was tasked to be the program’s first head coach.

Predictably, since it was a brand-new program filled with players with precious little playing experience, there were some early struggles.

“We were talking about that today, me and coach (Glenn) Quiggle, we had guys that had never put on a football helmet, or put pads in the pants,” Nehring said.

Nehring is no longer the head coach, he passed that title along to Nate Shaw before this season, but he’s still heavily involved with the team as the defensive coordinator.

Nehring and Quiggle, who is the offensive coordinator, have been there since the beginning, when the program was trying to find its footing.

Nehring has watched the program grow, has seen the team take steps forward each year, and now the Cougars are one victory away from a state championship.

“It’s a special bunch of guys,” Nehring said of this group of players. “These guys have been with us a long time. So we’re all thrilled. It has been a lot of fun.”

The program has reallly taken off in recent years.

In 2013, the Cougars won their first ever playoff game, and they reached the semifinals of the state playoffs.

A year ago, the Cougars set a school record for wins in a season, and once again they made it to the final four.

This year’s team has taken another big step forward.

For the third straight year, the Cougars made it to the final four, but this time they weren’t content to let the season end there.

“We keep taking steps,” Nehring said. “We had that home playoff win two years ago when Matt Brown was a junior. This year, we’ve been able to make it through to that final game.”

Nehring and Quiggle both coached together at Troup High before the Lafayette Christian program had been created.

After the program’s inception, Nehring was hired as the head coach, and he brought Quiggle with him.

“Coach Quiggle was still at Troup finishing out his last year, and when he got done with his teaching, he came over here and helped me coach,” Nehring said. “So we’ve been here through the duration working with me. He’s been tremendous. I enjoyed working with him at Troup all those years when we were there, and here too. It’s been super-special.”

Nehring’s relationship with Shaw goes back even further.

Both men are from Wisconsin, and they coached together there, and years later they were reacquainted down south.

“We coached together in Wisconsin, and then with him coming down, it’s been a great staff, great camaraderie,” Nehring said. “It’s been great working together.”

A new-comer to the staff this season is Kevin Payne, and Nehring said he has “fit right in.”

“He brings a lot of knowledge,” Nehring said. “He knows a lot about the game, and of course he’s got a lot of experience working with young men too being a youth pastor, so he’s fit right in.”

As much positive momentum as the program has right now, Nehring said no one is satisfied.

There is, he believes, plenty more the program can accomplish in the coming years.

The team will even soon have its own on-campus stadium.

“There are a lot of things still ahead of us we can do, and that we look forward to,” Nehring said. “We still hope to get to 11-man ball one day, and keep progressing.”

OF NOTE: For much more on the state-championship game, see Friday’s sports section and go to www.lagrangenews.com