Cougars on brink of a title 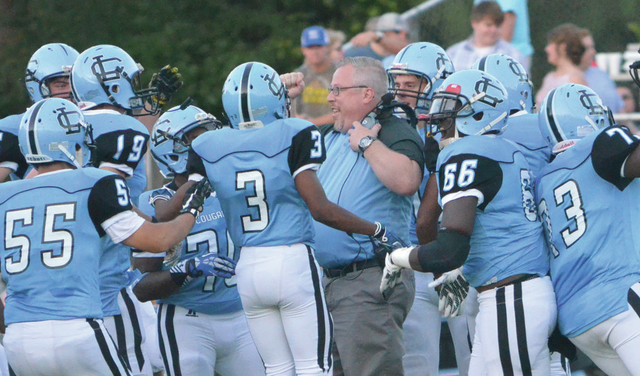 Lafayette Christian School’s seniors take a ceremonial lap around the practice field during the last practice before a playoff game. The Cougars will play for a state championship tonight. Kevin Eckleberry | Daily News

http://lagrangenews.com/wp-content/uploads/sites/37/2015/11/web1_cougars5.jpgLafayette Christian School’s seniors take a ceremonial lap around the practice field during the last practice before a playoff game. The Cougars will play for a state championship tonight. Kevin Eckleberry | Daily News LAGRANGE – It was the low point of the season.

After dropping a 58-56 overtime heart-breaker to Central Christian on Sept. 25, the Lafayette Christian School Cougars had dropped three straight games, and they were in danger of not making it to the state playoffs after reaching the final four the previous two years.

While the Cougars were down, they were a long way from out.

Since that loss, the Cougars haven’t lost a game, and if they can add one more win to their streak they’ll be the eight-man champions of the Georgia Independent Christian Athletic Association.

Lafayette Christian’s opponent in today’s state-title game will be the same Central Christian team it lost to more than two months ago.

The game will be played at Colonial Hills Christian School in Lithia Springs, with kickoff set for 7:30 p.m.

“After that loss, I kind of sat there and told them, it’s the playoffs from here on out,” Lafayette Christian head coach Nate Shaw said. “We’ve rattled off six straight wins, and seven would be nice.”

The Cougars punched their ticket to the final four by getting a thrilling road win over rival Praise Academy last week.

In the rematch, the Cougars fell behind 14-0 in the first half, but they rallied for a 36-34 victory to earn their first chance to play for a state title.

Now, Lafayette Christian is hoping to win another rematch and avenge that hard-fought loss to Central Christian.

“In this part of the season, there are no surprises,” Shaw said. “They’ve seen everything that we’re going to do, and we’re pretty confident we know what they’re going to do. So, it’s just about execution.”

It’s a tall task for the Cougars.

Central Christian, which won a title in an Alabama-based league a year ago, is 12-0 this season, and it has won 24 of its past 25 games.

This season, Central Christian has only had one competitive game, and that was its overtime victory over Lafayette Christian.

Every other victory for Central Christian has come in blowout fashion, including last week’s 68-43 win over Harvester Christian in the state semifinals.

Lafayette Christian, meanwhile, not only had the overtime game against Central Christian, it had close, hard-fought games against Harvester Christian, Praise Christian (twice), CrossPointe Christian and Holy Ground.

“We’ve been in a lot of close games. They’ve been in one,” Shaw said. “There’s a little more riding on it. Maybe the collar gets a little tight. We’ve dealt with that. You can always go back to that.”

The Cougars, like all successful eight-man football teams, have the ability to score points in bunches.

Beginning with the loss to Central Christian, Lafayette Christian hasn’t scored fewer than 34 points in a game, and three times in the past seven games they’ve scored more than 50 points.

The Cougars are getting it done with a freshman quarterback in Landon Whitley who has grown into his role.

In last week’s victory Praise, Whitley threw two touchdown passes, including the game-winner to Eli Shepherd in the final minute.

“Landon had a great day throwing the ball last week,” Shaw said. “He’s playing with confidence. He’s a highly competitive kid, and he’s able to leave bad plays in the past, even in the playoffs. He fumbled the ball at the 1-yard line and he was as mad as a hornet, but he came back and throws the game-winning touchdown pass.”

While the Cougars are effective when they go to the air, they are mostly going to look to run the ball.

The Cougars have some talented running backs, including dynamic senior Jemi Reed, who has the game-breaking speed to leave defenders in his wake.

Senior running back Anteveis Sands has come up big in his first and only season at Lafayette Christian, and Eli Shepherd has been a big-play running back as well.

Last week against Praise Christian, Sands and Shepherd both had touchdown catches.

Central Christian, which averages more than 400 yards of offense per game, usually scores every time it touches the ball.

With that in mind, Shaw figures his offense’s ability to control the game on the ground could be a key.

“We’ve really committed to running the ball since (the first Central Christian game),” Shaw said. “I think that’s going to be a key for us to play a little keep-away because their quarterback is so good. If we grind out the ball on the ground, we’ll chew up a bunch of that clock, and I think that’ll play to our advantage.”

The Cougars don’t throw the ball much, but when they do, those plays have a chance to go for big yardage.

That was the case last week against Praise Christian.

“Praise played all eight in the box,” Shaw said. “When we break out, our guys are running unfettered through the secondary, and it’s an easy pass to complete.”

Lafayette Christian’s defense has delivered when it has had to during the winning streak.

During a must-win game in the regular season, Lafayette Christian’s defense made a stop on a two-point conversion attempt in the closing moments of a 35-34 win over Holy Ground.

Then in last week’s semifinal game, after the offense scored to take the lead, the defense didn’t allow Praise Academy to move the ball.

The Cougars held their final practice session of the week Wednesday morning, and Shaw liked the attitude of the players.

Now, it’s time to go out and play for a championship.

“If I’ve learned one thing about our guys over the past few weeks, if they’re loose the last practice before a game, that’s usually a good sign,” Shaw said. “We had a really good practice, and they weren’t all tense. They’ve bought into we don’t have anything to lose. All the pressure’s on (Central Christian), and they kind of like that, and they like being in the road whites. We’re ready.”