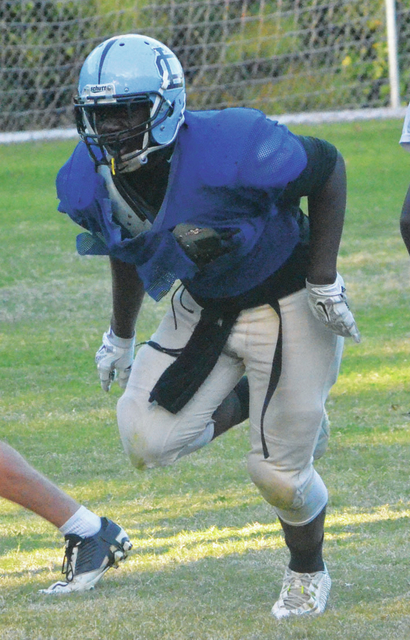 LAGRANGE – As the Lafayette Christian School Cougars made the trip to Powder Springs last week, they were looking for a breakthrough victory.

In the 2013 and 2014 seasons, the Cougars reached the semifinals of the Georgia Independent Christian Athletic Association state playoffs, but they fell short both years.

Early in last week’s showdown with Praise Academy, it looked liked Lafayette Christian could be headed for another final-four exit.

Praise Academy, which had already beaten Lafayette Christian earlier in the season, surged to a 14-0 lead in the first half, and it was riding high on its home field.

Were the Cougars once again going to be denied a spot in the championship game?

The Cougars rallied from that early deficit and ended up winning a 36-34 thriller to earn a chance to play for the first state title in the eight-year history of the program.

“Our guys responded,” Lafayette Christian defensive coordinator Nick Nehring said. “I don’t think our guys ever stopped believing that they could win the game, that we could come through in the game. That was a big factor right there, just the attitude of the guys overall.”

It was the sixth straight win for the Cougars, who at one point were 3-3 after dropping three games in a row.

It hasn’t been an easy road to the championship game for the Cougars.

While the Cougars (9-3) have won their share of blowouts, they’ve been involved in plenty of hard-fought, down-to-the-wire games.

Two of those games were against Praise Christian.

The first time those two teams met in the regular season, it was Lafayette Christian soaring to a 19-0 lead before losing 40-19.

In the rematch, the stakes were obviously quite a bit higher, and the Cougars played like a team that was no stranger to close games.

Most of the team’s nine seniors were part of the previous trips to the final four, so they’d been there before, and they didn’t panic.

“It was a great team effort all the way around, and I’m especially proud of our seniors for making big plays when we needed to,” Nehring said.

One of those seniors, Eli Shepherd, made one of the biggest plays of the game.

The Cougars were trailing by five points with less than a minute remaining when Shepherd, who plays fullback on offense, took a pass from freshman quarterback Landon Whitley and went 45 yards for the go-ahead touchdown.

Shepherd then moved to his linebacker position on defense and helped Lafayette Christian close the game out.

Another senior, running back Anteveis Sands, also had a touchdown catch, and it came in the first quarter with the Cougars down by 14 points.

That touchdown came on a fourth-down play, and it helped get the Cougars going after the slow start.

Reed had two touchdown runs, and Marshall had one scoring run.

Mixed in with all the veterans is Whitley, who moved to quarterback earlier in the season when Marshall went down with an injury.

“He’s been through a season now,” Lafayette Christian head coach Nate Shaw said. “He’s not a freshman anymore, and he certainly didn’t play like a freshman (against Praise).”

Defensively, the Cougars made the stops when they had to, most notably at the end of the game when Praise still had some time left to win it.

“Our boys defensively responded well, especially when it mattered, and forced some turnovers and made some big defensive stops,” Shaw said.

Junior defensive lineman Josh Shepherd had a huge game with 18 tackles, and Eli Shepherd came up big from his linebacker position as well.

Reed, a cornerback, had 15 tackles, and he also had a key interception.

Jonathan Parham, a linebacker, and sophomore linebacker Jacob Lueken were also in double figures in tackles, and other defensive standouts were Lane Brooks, Jess Hill, Marshall, and Caleb McCurry, who had a fumble recovery.

Gary Johnson had some big tackles as part of the kickoff coverage team, and Morgan Channell continued to do a terrific job handling the kicking duties.

There were two months between the two games against Praise Academy, and Shaw felt his team had improved a great deal since the first meeting.

The Cougars proved the coach right by getting the enormous road win.

“We’ve adjusted personnel, we healed some injuries,” Shaw said. “You put a bunch of time between that, switch some people around, I think making us better all-around at multiple positions.”

The program’s come a long way