The ‘voice’ of Clark-Holder retires 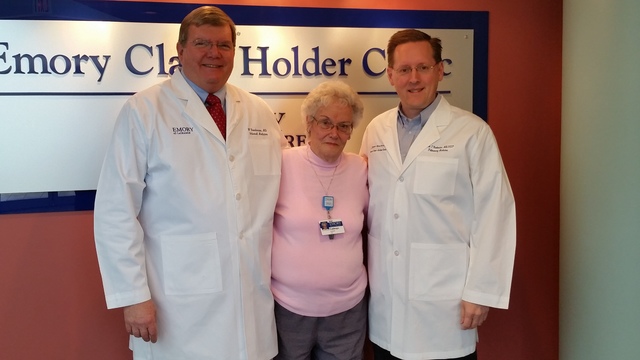 Cathryn ‘Cat’ Patterson hugs a former colleague goodbye as she makes her last rounds at the Emory at LaGrange clinic off Smith Street before beginning her retirement. Patterson worked at the medical center for 31 years.

http://lagrangenews.com/wp-content/uploads/sites/37/2015/11/web1_WEBEmory1.jpgCathryn ‘Cat’ Patterson hugs a former colleague goodbye as she makes her last rounds at the Emory at LaGrange clinic off Smith Street before beginning her retirement. Patterson worked at the medical center for 31 years. Cathryn ‘Cat’ Patterson stands with Dr. Warren Henderson, president of Emory at LaGrange, left, and Dr. Ken Horlander, a specialist in pulmonary medicine. Both said Patterson was an integral part of the clinic and will be missed by staff and patients alike.

http://lagrangenews.com/wp-content/uploads/sites/37/2015/11/web1_WEBEmory2.jpgCathryn ‘Cat’ Patterson stands with Dr. Warren Henderson, president of Emory at LaGrange, left, and Dr. Ken Horlander, a specialist in pulmonary medicine. Both said Patterson was an integral part of the clinic and will be missed by staff and patients alike.

LaGRANGE — For nearly 31 years Cathryn Patterson’s main job was to talk to people at Clark-Holder Clinic, now known as Emory at LaGrange.

Miss “Cat,” as she was fondly called by her colleagues and friends, started in 1984 and worked on the clinic switchboard.

“I loved that job,” she said. “When I first started, I got kidded a lot because I would say, ‘Good afternoon, Clarrrrrrk Holder Clinic,’ and drag out the R. I had a lot of good years on that switchboard … I took a lot of calls. The busier I was, the more I liked it.”

Patterson said she even had “regulars.”

“I had one or two people that would call me every day and say, ‘I just called to hear your voice.’”

The switchboard employee said she even enjoyed her job when some of the clinic staff decided to play pranks on her.

Five years ago, Patterson said the clinic decided to get rid of the switchboard and upgrade their system to a computerized call center.

Clinic officials moved Patterson from her closet-sized, windowless office to the front desk of the facility as a customer service representative.

Among other duties, Patterson is a liaison for the clinic and interacts with the patients.

“It’s been a trip. You really get attached to (patients),” she said. “You talk to them and just try to encourage them … I love my patients.”

“Your patients love you,” replied Sharon Williams, manger of business and patient relations at Emory at LaGrange.

At 87 years old, Patterson said she gets up at 4:30 a.m. every morning and drives from Pine Mountain to make sure the doors to the clinic on Smith Street are open by 8 a.m.

“People said, ‘I wish I had your job!’ I would say, ‘It’s a tough job, but somebody’s got to do it, and that somebody’s going to be me,’” she said jokingly.

Colleagues said in the 31 years Patterson was employed at the medical center, she rarely called in sick to work.

“I don’t party on Friday and Saturday nights so I can’t make it to work on Mondays. Nope. Don’t do it,” she said with a smile.

Starting today, Patterson will have time to do whatever she wants with her weekends — and her weekdays.

The 87 year old is hanging up the Emory at LaGrange phones for good and beginning her retirement.

Clinic staff said Patterson has always been an integral and special part of the medical center since she has been there.

“She’s part of the definition of the Clark-Holder Clinic,” said Dr. Ken Horlander, with pulmonary medicine. “She always had a smile on her face.”

“She would always greet everyone when they come in,” Dr. Warren Henderson, president of Emory at LaGrange, explained. “She’s been the voice of Clark-Holder when we’ve called in after all these years. She will be missed.”

Patterson said she was trying to say goodbye to as many of her colleagues and patients as she could before she left. She made no promises she would not cry at the end of the day.

“You become very attached to your patients. You learn a lot about people,” she said. “I’ll miss the employees and my patients … I’m going to miss you all so much. I’m really going to miss this.”

Patterson said her only specific plans right now are to see her children and catch more of her great-grandchildren’s ball games.