Georgia’s Richt is done after 15 seasons 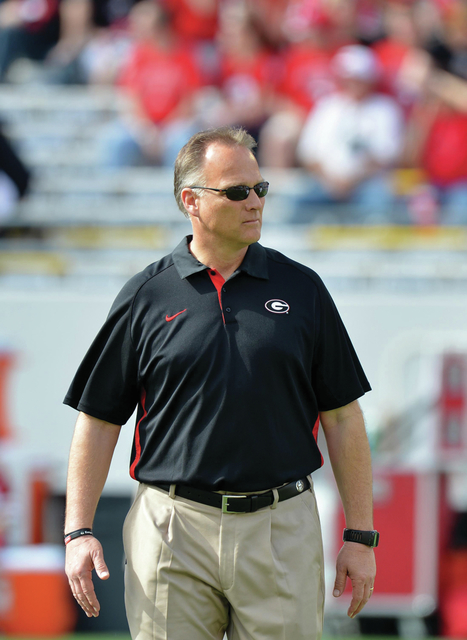 Mark Richt has stepped down as the head coach of the Georgia Bulldogs.

http://lagrangenews.com/wp-content/uploads/sites/37/2015/11/web1_Richt.jpgMark Richt has stepped down as the head coach of the Georgia Bulldogs.

ATHENS – It was a Sunday bombshell.

Mark Richt, the second winningest coach in the history of the Georgia football program, met with athletic director Greg McGarity on Sunday morning.

Later in the day, the announcement was made.

Richt, whose team beat Georgia Tech on Saturday to complete a 9-3 regular season, will no longer be the University of Georgia head football coach.

McGarity released a statement that said the two “mutually agreed that he would step down as head coach and would have the opportunity to accept other duties and responsibilities at UGA following the bowl game.”

Only Vince Dooley won more games at Georgia than Richt, who amassed a 145-51 record during his 15 seasons.

That included two SEC championships, although they both came in Richt’s first five seasons in Athens.

Richt’s only comment came in a brief statement released by Georgia.

“I appreciate the opportunity of serving the university as well as considering any other options that may present themselves in the future,” Richt said.

Richt’s fate may have been sealed with a blowout loss to Florida that ended Georgia’s chances of winning the SEC East.

The Bulldogs were the preseason pick to win the East, but they lost three SEC games, including one-sided losses to Alabama and Florida.

All of Georgia’s current players were recruited by Richt, including freshman wide receiver Terry Godwin, a Callaway High graduate.

Now, those players will be playing for a new coach, and how Richt’s leaving affects the incoming recruiting class remains to be seen.

One of the players Richt had been recruiting is Callaway’s Braylon Sanders, who’ll be a senior next season.

A number of local players, including former Troup Tiger Chris Burnette and LaGrange High graduate Bruce Thornton, have played for Richt over the years.

Dawson said all the players appreciate “how much he loves everybody. It’s all the same, walk-ons and scholarship athletes. He teaches us to be good men.”

Another senior, fulback Quayvon Hicks, said “I wish the best for him. I enjoyed my four years here with him. We have to understand it is part of the business. We’ve got to make sure we stay together and our minds are right. It’s bigger than us.”

Hicks did add that the “program is always going to be great,” no matter who is leading it.

“I know it’s a big thing especially when you build a relationship with a head coach, especially (quarterback recruit) Jacob Eason,” Hicks added. “The kid should keep his head on straight. If you want to make a difference, come here and win some ballgames.”

Following Saturday’s game against Georgia Tech, many of the questions directed toward Richt were about his job status.

Although the Bulldogs won nine games, they came up short against the three best teams on their schedule.

The Bulldogs also failed to meet expectations in 2013 and 2014, with Missouri winning the SEC East both years.

While Georgia has continued to win consistently, it has been unable to keep pace with the elite teams in the SEC.

One man who was disappointed by the move is Alabama head coach Nick Saban, who questioned how someone who averaged nearly 10 wins per year could in essence be fired.

“I don’t know what the world’s coming to in our profession,” Saban said. “Mark Richt’s been a really good coach and a really positive person in our profession for a long, long time. I think when you win nine games, that’s a pretty good season, especially with the body of work that he’s been able to put together there for however many years he’s been there.”

While the overall numbers are impressive, a lot of Richt’s best work came early in his tenure.

In the past 10 years, the Bulldogs have only made it to Atlanta for the SEC championship game twice.

Once they were blown out by LSU, and in 2012 they lost to Alabama 32-28 with a spot in the BCS championship game on the line.

In the past three years, Georgia hasn’t been close to being a top-tier program, so the move was made.

Georgia now begins to search for a new coach, and there are plenty of names being mentioned as candidates, including Alabama defensive coordinator Kirby Smart.

Georgia will hold a press conference today to discuss Richt’s departure, and the coaching search.

Sensational season ends with a title