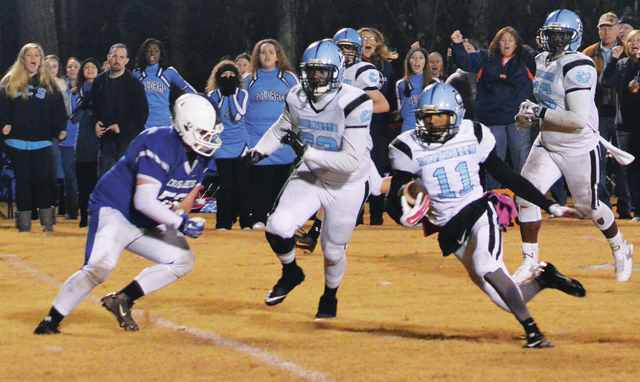 Lafayette Christian School’s Jemi Reed returns an interception for a touchdown during the first half of Friday’s state-championship victory over Central Christian. Kevin Eckleberry | Daily News

http://lagrangenews.com/wp-content/uploads/sites/37/2015/11/web1_cougars27.jpgLafayette Christian School’s Jemi Reed returns an interception for a touchdown during the first half of Friday’s state-championship victory over Central Christian. Kevin Eckleberry | Daily News

LITHIA SPRINGS – They were rolling.

After scoring a touchdown on their first possession, the Central Christian Crusaders had the ball in Lafayette Christian School territory with a chance to pad their 6-0 lead.

Fortunately for the Cougars, they had Jemi Reed on their side.

The play-making senior picked off a Jared Farlow pass, and he went the distance for a touchdown, and the game was tied.

It was a momentum-turning play, and the Cougars went on to beat the Crusaders 41-30 to win the Georgia Independent Christian Athletic Association eight-man football state championship.

Reed added another interception late in the game that wrapped up the victory, and he was also a major contributor on offense.

Reed only played one season of football for the Cougars, and he made the most of it.

“Jemi, I would say he’s the MVP of the team,” Lafayette Christian School senior Sam Marshall said. “It’s been a huge blessing having him. I love having him on the team.”

The Crusaders marched down the field and scored the first time they had the ball to take the lead.

After the Cougars went three-and-out on their second possession, the Crusaders were on the move again.

Farlow threw a pass to the end zone, and Reed picked it off.

Reed, displaying an impressive combination of speed and elusiveness, went the full 80 yards for the touchdown.

“It was a nice play, because it rallied the whole team,” Reed said. “Everybody got some momentum, and everybody just moved on like a train from then.”

On the Cougars’ first touchdown drive, Reed had two carries for 14 yards, and a pair of catches for eight yards.

Later in the half, Reed made a sensational 14-yard catch, although the Cougars didn’t score on that drive.

On a third-quarter scoring drive, Reed had a couple of nice runs to help the team move down the field.

Then late in the fourth quarter, Reed once again showed off his ball-hawking skills.

With the Cougars leading by 10 points, Reed intercepted a Farlow pass, and he returned it to the 9-yard line.

That interception ended any chance the Crusaders had of winning.

“It was a real feeling of relief for my team,” Reed said of his game-clinching interception. “Just coming out here and catching the interception late in the game to seal the deal for my team, just put the icing on the cake was big. Like coach was preaching to us, he said we’ve got to make big plays, and just do our job. I was in coverage. The quarterback dropped back, and he was real tired from the beating he was getting all game. I jumped the route, and caught the interception.”

Reed is part of a talented group of seniors who will be hard to replace.

That group includes linebacker and fullback Eli Shepherd, who in February will likely become the first Lafayette Christian player to sign a college football scholarship.

Another senior is running back Antaveis Sands, who had a pair of touchdown runs in Friday’s game.

“We’re going to lose a lot of seniors,” Shaw said. ” We’ll have to rebuild for next year. But we’re just incredibly proud of our seniors.

As for Reed, it was a special way for him to cap his one and only season as a Lafayette Christian football player.

“It’s a blessing,” Reed said. “Coming out here my first year playing for this team full of brothers, everybody rallied together, and we all had one dream, and we all accomplished it. We’re one team, one unit. Everybody contributed.”

Sensational season ends with a title