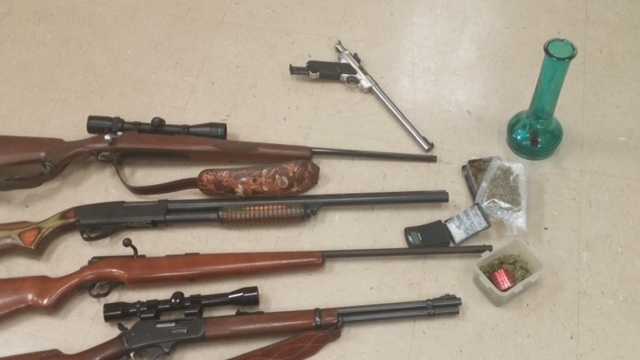 Meriwether County Sheriff’s investigators showcase the different types of guns and drugs seized from the home of Jessie Lee Anders, 60. Investigators, in conjunction with several other law enforcement agencies, executed an undercover operation on Anders’ residence in the 700 block Primrose Road in Greenville. Sheriff Chuck Smith said they received a tip Anders had illegal drugs and was possibly making some type of explosive device.

http://lagrangenews.com/wp-content/uploads/sites/37/2015/11/web1_guns.jpgMeriwether County Sheriff’s investigators showcase the different types of guns and drugs seized from the home of Jessie Lee Anders, 60. Investigators, in conjunction with several other law enforcement agencies, executed an undercover operation on Anders’ residence in the 700 block Primrose Road in Greenville. Sheriff Chuck Smith said they received a tip Anders had illegal drugs and was possibly making some type of explosive device.

GREENVILLE — The Meriwether County Sheriffs Office announced Monday it made multiple arrests within the past two weeks with surrounding agencies during joint undercover operations.

According to Smith, investigators were working off a tip given to the Department of Community Supervision that said Anders reportedly possessed illegal drugs and he was possibly making some type of explosive device.

Smith said at the time teams of agents executed a search on Anders home, his reported girlfriend, identified as Lisa Darlene Newell, 55, entered the residence and allegedly attempted to hide a bag of marijuana.

A subsequent search of the residence led to the discovery of 31.5 grams of marijuana, 2.5 grams of methamphetamine, five firearms, two containers of smokeless powder, one container of rifle powder, one box of pistol primers and numerous drug paraphernalia, Smith stated.

The couple are still in the Meriwether County Jail.

Meriwether County sheriff’s deputies responding to a domestic disturbance in the 2600 block of Luthersville Road in Luthersville on Nov. 22 discovered a felon escapee from Troup County.

Smith said when deputies arrived at the home, they learned the person causing the dispute was Jeremy Steven Bartlett, 28.

According to Smith, Bartlett was a part of the Troup County Work Release Program and had been on the run since June 9 after failing to return to the facility.

Smith stated Bartlett had already fled into a wooded area before deputies arrived.

Deputies set up a perimeter and had a K9 unit on the way when patrol units apprehended Bartlett underneath a porch at the rear of the residence, Smith said.

Bartlett was arrested for the outstanding felony escape warrant and was turned over to the Troup County Sheriff’s Office deputies at the county line.

A Meriwether County man was arrested after reportedly assaulting two people at a residence in the first block of Waddell Lane on Nov. 21.

Smith said investigators determined Clint Olin Fowler, 43, of Owens Road, Woodbury, got into a physical altercation with a female victim and allegedly shoved her into a glass door.

According to Smith, when a male subject tried to intervene, Fowler retrieved a shotgun from his vehicle and reportedly pointed the weapon at the male and chased him around the yard.

Smith said Fowler then placed the gun back inside his vehicle and allegedly began to fight the male victim, striking him in the face with his fist.

By the time deputies arrived at the home, Fowler had fled the scene, Smith stated.

He was quickly captured the next day near his home on Owens Road, according to a press release.

Fowler was charged with aggravated assault, battery and simple battery under the Family Violence Act.

He was transported to the Meriwether County Jail.

Meriwether County sheriff’s investigators, along with law enforcement officers from the Harris County Sheriff’s Office were able to locate and arrest a suspected burglar as he arrived at his home in the first block of River Road on Nov. 17.

Sheriff Smith said both agencies arrived at the residence just as Matthew Wade Grantham, 38, was exiting his vehicle.

Smith stated Grantham then attempted to throw an item – later found to be suspected marijuana – back inside his car.

After obtaining a search warrant for Grantham’s house, investigators from both agencies discovered stolen property that came from the burglary within their jurisdiction, plus illegal drugs.

Smith said there was also a female inside the home who was identified as Stacha Odette Chambers, 44, of Boulevard Street, LaGrange.

Both Grantham and Chambers were transported to the Meriwether County Jail.