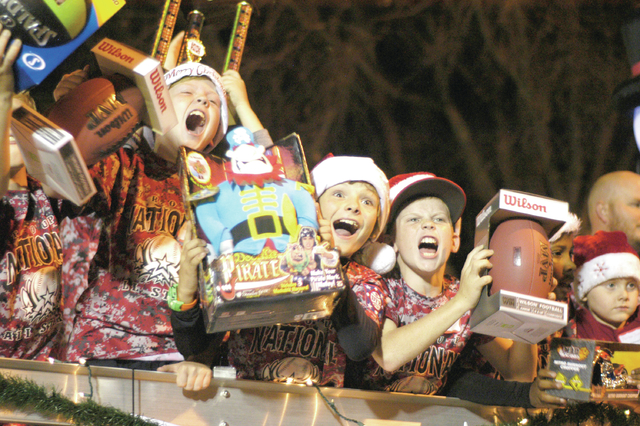 Members of the Troup Nationals All-Star baseball team react to the crowd at the 2014 LaGrange-Troup County Chamber of Commerce Christmas Parade in downtown LaGrange. The 2015 parade is scheduled for Thursday at 6 p.m.

http://lagrangenews.com/wp-content/uploads/sites/37/2015/12/web1_1205ParadeWeb01CMYK.jpgMembers of the Troup Nationals All-Star baseball team react to the crowd at the 2014 LaGrange-Troup County Chamber of Commerce Christmas Parade in downtown LaGrange. The 2015 parade is scheduled for Thursday at 6 p.m.

LaGRANGE — The 39th annual LaGrange Christmas Parade on Thursday in downtown LaGrange may look a little different this year.

Rather than the traditional red, white and green, this year’s parade may look more red, white and blue with the theme of “A Star Spangled Christmas,” in honor of grand marshal Bernard Bledsoe.

Bledsoe, who served in the U.S. Marine Corps from 1959 to 1965 and later retired from Milliken mills, serves with the Marine Corps League and is a longtime supporter of Toys for Tots. He will lead the parade at 6 p.m. after he and his family light the Christmas tree with Mayor Jim Thornton on Lafayette Plaza at the corner of Bull Street and Lafayette Square.

It’s also the second year in a row the Budweiser Clydesdale horses will appear in the parade.

Prior to the parade, Santa Claus and his North Pole friends will be on Lafayette Plaza from 3 to 5 p.m. for the “Mingle with Kringle.” The event leads into the tree lighting event that kicks off the parade.

Parade participants are asked to contribute an unwrapped toy as a holiday gift to less fortunate children in addition to the $35 registration fee. All toys will be given to local agencies to help make the holidays extra special for those in need.

The parade will begin at Granger Park and head south on North Greenwood Street. Marching groups will be merged into the parade from Saint Mark’s Episcopal Church at 207 N. Greenwood St. The procession will go down North Greenwood Street to Haralson Street, where the route will turn east. The parade will turn right from Haralson onto Church Street and travel south through the square and down Bull Street, turning left onto Broome Street and making another left to head north up Main Street, again through the square, and up Ridley Avenue.

Marching groups may begin to drop out at Battle Street. Floats and motor-driven vehicles should continue north on Ridley to Highland Avenue, turn left and head to Granger Park before letting anyone off.

Float judging will begin before the parade promptly at 4:30 p.m. All floats must be in place and ready to be judged by 4:15 p.m. In order for an entry to be considered for an award, the application form must have been submitted and the entry fee paid before Nov. 21. Floats must be different from previous years to be eligible for awards.

• Floats and vehicles — Granger parking lot across from LaGrange High School by 4:15 p.m.

For more information, contact the parade’s sponsor, LaGrange-Troup County Chamber of Commerce, at 706-884-8671 or letisha@lagrangechamber.com.

• The Hogansville Christmas Parade is set for 6 p.m. Saturday. The parade will travel from Hogansville Elementary School down East Main Street toward U.S. Highway 29. It is preceded by a Christmas Bazaar at 308 E. Main St. 10 a.m. to 2 p.m., Christmas music beginning 4:30 p.m. at the gazebo off East Main Street, a storytelling event at 5 p.m. and a tree lighting at 5:45 p.m. downtown, according to Jackie Byars of the Hogansville Merchants Association. For more information, contact Byars at 706-302-0026 or jackiewbyars@aol.com.