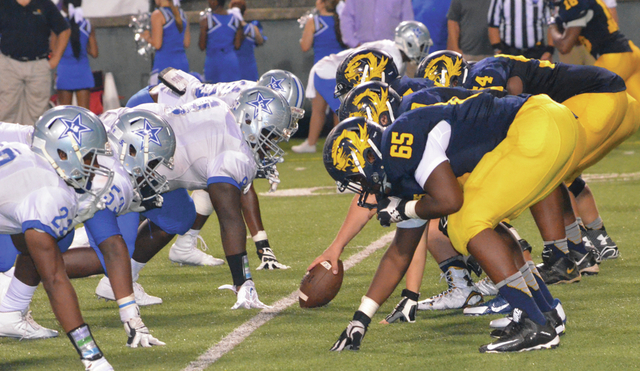 When the Troup and LaGrange football teams play next season, they’ll likely be in the same region. Kevin Eckleberry | Daily News

LAGRANGE – LaGrange and Troup are together again.

The Georgia High School Association unveiled its region assignments on Tuesday, and Troup and LaGrange are part of a new-look Region 5-AAAA.

For the past two school years, Troup and LaGrange have been in different classifications, but they will both be in Class AAAA for the 2016-2017 and 2017-2018 school years.

Callaway, meanwhile, will be one of six teams in Region 5-AA.

The new region assignments aren’t etched in stone yet.

Schools will have a chance to request a transfer to a different region within the same classification, and the the new regions will be ratified on Jan. 13 when the GHSA executive committee meets.

Troup and LaGrange were region rivals for years, but that changed beginning with the 2014-2015 school year.

Both schools were placed in Class AAAA, but LaGrange opted to play up a classification, while Troup stayed put.

When the new classifications were announced last month, Troup and LaGrange were once again both placed in Class AAAA, and this time they both opted to remain there.

Troup and LaGrange, for the moment anyway, are part of a seven-school Region 5-AAAA.

The other schools are Cartersville, Cedartown, Central-Carroll, Chapel Hill and Sandy Creek.

Callaway is set to share Region 5-AA with a familiar foe in Heard County.

Those two have been in the same region often over the years, and teams from those schools have continued to play each other the past two school years while they’ve been in different classifications.

The other four schools in the region are Jordan, Lamar County, Spencer and Temple.