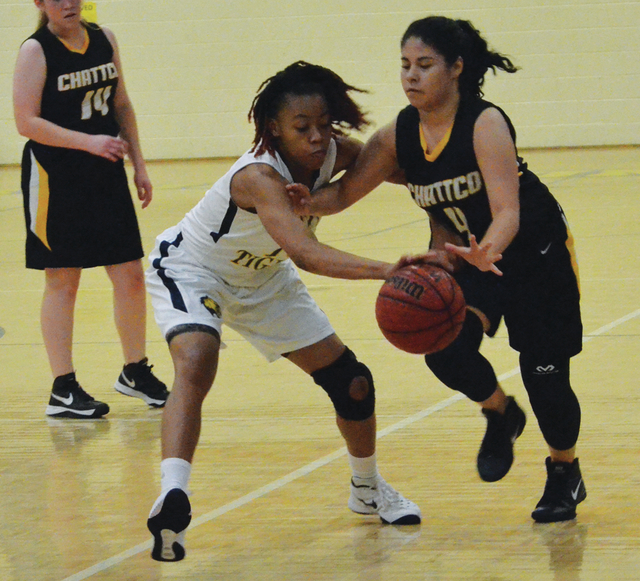 Troup’s Tremayne Tolbert goes up to pull down a rebound during Tuesday’s 68-55 victory over Chattahoochee County. Kevin Eckleberry | Daily News

http://lagrangenews.com/wp-content/uploads/sites/37/2015/12/web1_troup11.jpgTroup’s Tremayne Tolbert goes up to pull down a rebound during Tuesday’s 68-55 victory over Chattahoochee County. Kevin Eckleberry | Daily News LAGRANGE – The Troup Tigers will carry a winning streak into Friday’s showdown with the rival LaGrange Grangers.

Since dropping their season opener to Newnan, the Tigers have won two in a row, including Tuesday’s 68-55 home victory over Chattahoochee County.

It was also a winning night for the Troup Lady Tigers, who improved to 2-0 with a 58-7 victory.

In the boys’ game, the Tigers got a big effort from senior Isaac Moss, who scored 18 points, and sophomore guard Jarrious Jefferson added 17 points.

Dexter Shealey chipped in with 10 points for Troup.

Troup had its most productive offensive night of the young season, and head coach Paul Brewer said his team did a nice job of handling Chattahoochee County’s pressure defense.

In fact in the fourth quarter, when Chattahoochee County really turned up the pressure, Troup scored 21 points to win going away.

That was Troup’s highest-scoring quarter of the game.

“Offensively, I thought we handled (the pressure) fine,” Brewer said. “Defensively, as well as we played Saturday (against Harris County), we didn’t play as well tonight. We let too many guys split us and get in between us and pressure us, and that’s something we’ve got to clean up.”

The lead was at 10 points late in the third period when Jefferson and freshman Keyshawn Russell teamed up for one of the night’s top highlights.

On an inbounds play, Jefferson lobbed the ball toward the basket, and the 6-foot-3 Russell caught it and slammed it home, and the Tigers took a 49-37 lead into the final period.

Chattahoochee County was hanging around late in the fourth quarter when Troup put the game away.

Jefferson came up with a steal, and that led to a 3-pointer by Moss that gave the Tigers a 66-51 lead with 1:35 to play, and they were ahead by at least 11 points the rest of the way.

Many of Troup’s top contributors in Tuesday’s game, including Jefferson, Russell, King Mwikuta, are either freshmen or sophomores, so the future looks bright for Troup.

“We knew coming into this year that we’re going to be underdogs,” Brewer said. “But we think, watching our JV guys and watching our eight-grade guys, that the day of us being an underdog is wrapping up.”

There was no suspense in Tuesday’s girls’ game.

The Lady Tigers soared to a 17-2 lead after the first period, and they didn’t look back.

All 11 Troup players got on the court, and everyone of them scored.

In the closing moments, everyone but sophomore Christy Allen had scored, and she made a basket to make sure every Troup player would be in the scoring column.

It’s the second straight game where Thornton has been able to empty her bench and get everybody a lot of court time.

“They work hard at practice, and they deserve some playing time,” Thornton said.

Thornton said the game gave the team a chance to just “work on some things we’ve been working on in practice, things we saw that we messed up from the first game (against Harris County). We’re just trying to tighten up the screws a little bit.”

Troup will try to move to 3-0 when it visits LaGrange on Friday.

Troup’s boys’ and girls’ teams were scheduled to host Callaway on Saturday, but those games have been postponed and will be rescheduled.