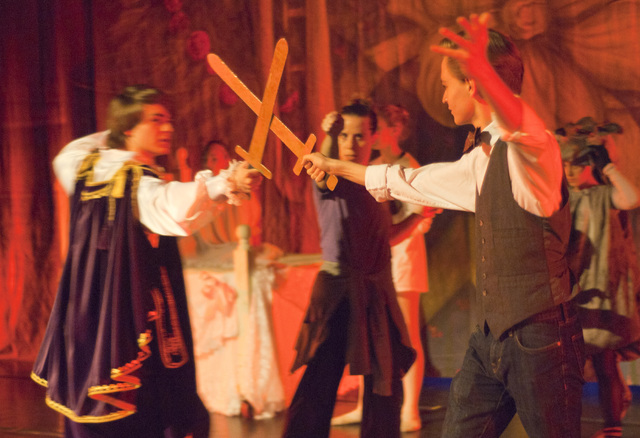 A dancer portraying a rat rehearses Tuesday for the LSPA’s production of ‘The Nutcracker.’

http://lagrangenews.com/wp-content/uploads/sites/37/2015/12/web1_Nutcracker02WEB1.jpgA dancer portraying a rat rehearses Tuesday for the LSPA’s production of ‘The Nutcracker.’ Children playing toy soldiers await instructions Monday from artistic director Amy Orr during a rehearsal for the LSPA’s production of ‘The Nutcracker.’

http://lagrangenews.com/wp-content/uploads/sites/37/2015/12/web1_Nutcracker03WEB1.jpgChildren playing toy soldiers await instructions Monday from artistic director Amy Orr during a rehearsal for the LSPA’s production of ‘The Nutcracker.’ Angela Anderson, center, a ballet instructor, gives direction to dancers on Tuesday during a rehearsal for the LSPA’s production of ‘The Nutcracker.’

http://lagrangenews.com/wp-content/uploads/sites/37/2015/12/web1_Nutcracker04WEB1.jpgAngela Anderson, center, a ballet instructor, gives direction to dancers on Tuesday during a rehearsal for the LSPA’s production of ‘The Nutcracker.’ Thomas, left, and Trenton Prater, 15, practice their sword fight during rehearsals Tuesday for the Lafayette Society for Performing Arts’ production of ‘The Nutcracker’ as artistic director Amy Orr watches. The production opens Friday at 7 p.m.

http://lagrangenews.com/wp-content/uploads/sites/37/2015/12/web1_Nutcracker01WEB1.jpgThomas, left, and Trenton Prater, 15, practice their sword fight during rehearsals Tuesday for the Lafayette Society for Performing Arts’ production of ‘The Nutcracker’ as artistic director Amy Orr watches. The production opens Friday at 7 p.m.

LaGRANGE — The clinking of metal swords echoed through the auditorium Tuesday as a fight raged on. A king and a prince lunged toward one another, their acolytes cheering from the wings. At the end of the battle, only one was left standing — that is, until the music stopped.

Twin brothers Trenton and Thomas Prater, 15, star this year as the Nutcracker Prince and the Rat King in the Lafayette Society for Performing Arts’ annual production of “The Nutcracker,” opening Friday.

This week, they’ve been rehearsing the epic sword-fight battle that takes place during the show. The twins also starred last year in the same roles, but this year is different.

“This year, they’ve been pretty brief in rehearsals,” said Amy Orr, the ballet’s artistic director. “They came in pretty much knowing what to do, and basically worked to improve on their roles from last year.”

Now in their second year, the twins have grown more comfortable in their roles and have even introduced elements from some unlikely sources.

“They’ve taken a lot of the movements and such from movies like Indiana Jones and Star Wars,” Orr said. “They’ve basically come to me and said, ‘hey, we want to try this.’”

The two twins are no stranger to the stage. They’ve previously performed with the LSPA, along with the New Horizon Community Theatre in West Point.

Trenton, who plays the Nutcracker Prince, said he was in New Horizon’s production of “Pinocchio” last year and that’s where his Nutcracker director, Orr, discovered him and his brother.

“I think the two guys who played the parts before us graduated,” he said. “Amy’s daughter was in that show, and that’s how we met. We’ve sort of been drafted into the role.”

Although he’s more of an actor than a dancer, he said, Trenton has enjoyed working with the cast of “The Nutcracker.”

“You have a lot of casts where people are just there to work, and they don’t have any fun,” he said. “Then you also have casts were people kind of goof off a little too much and the production suffers. This cast knows how to strike the right balance and still have fun, but get things done. They’ve been very professional. This is a good cast.”

“This has been one of the best casts I’ve ever worked with,” he said. “Mrs. Amy has been really awesome.”

“I try to kind of carry myself on stage like a goofy Darth Vader,” he said. “If you’ve ever seen ‘Space Balls,’ I kind of imagine it being like Dark Helmet (the Vader-esque character in the film).”

Serious or comedic, Orr said there’s something special about the staying power of “The Nutcracker” that’s endeared it to generations across the globe.

“I think Tchaikovsky’s score is beautiful in and of itself,” she said. “And the media has made the music ultra-famous. It’s a Christmas tradition.

“For this area, I think it’s the appeal of it being a community production,” she added. “You get to see your neighbors and friends and nieces in the show. I think that’s really special. I like to say we don’t find dancers, we make them.”

The LSPA’s Lafayette Ballet Company’s production of The Nutcracker opens Friday at 7 p.m. at the Troup High School Fine Arts Auditorium, 1920 Hamilton Road. Additional performances are scheduled for Saturday at 2 p.m. and 7 p.m. and Sunday at 2 p.m. Tickets may be purchased at the box office, online at www.lsparts.org or by calling 706-882-9909.