Children’s author to speak at library 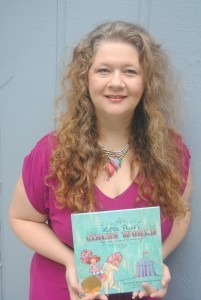 LaGRANGE — Charmain Zimmerman Brackett, author of children’s and young adult literature, will be the next speaker in the Friends of the Library Author Talk Series at 6:30 p.m. Monday at LaGrange Memorial Library.

Following her talk, the author will be available for a book signing and reception. The Author Talk series is free and open to the public; children are welcome.

An Augusta native and journalist, Brackett has experienced success with her first foray into writing children’s fiction with “Little Pearl’s Circus World,” for which she was awarded the 2015 Georgia Author of the Year award in children’s literature.

“Little Pearl’s Circus World,” is based on the true story of her great-grandmother who began performing in the circus owned by her father when she was 4 years old. It combines an illustrated story based on the writings of Pearl’s daughter, Juanita LaComa Zimmerman, with a history of the circus and family photographs.

Brackett worked in print journalism for 27 years with The Augusta Chronicle, The Signal and other regional newspapers and magazines. Her feature series about returning wounded warriors garnered her a second place award in the 2008 Department of Army Keith L. Ware journalism competition.

Brackett lives in Augusta with her husband, Bret. They have three children: Jessica, Jeremy and Allie, and a 5-year-old rescued papillon named Danni.

In addition to her award-winning children’s book, she has written four young adult novels including the 2014 Yerby Award for Fiction winner, “The Key of Elyon.” Other titles include “Elyon’s Cipher,” “Elyon’s Light” and “Fixed in the Tempest.” Under the pen name of C. Z. Brackett, she has published five mystery novellas in the Victoria James Mystery Series.

The first three, “Murder at Twin Oaks,” “Murder at the Masquerade” and “Murder in Threes,” are available on Amazon for Kindle and are combined into a paperback anthology called “Murder Runs Deep.”

The second set of three novellas, “Murder in Session,” “Murder Special Edition” and “Murder in Chambers,” have been combined into a second paperback anthology, “Murder’s Deep Secrets.” “Murder Runs Deep” is a finalist for the Tybee Island Book Festival’s book awards. The winner will be announced in December. Another upcoming publication is the illustrated children’s book, “Nutcrackers and Pirates: A Boy’s Journey into Dance.”