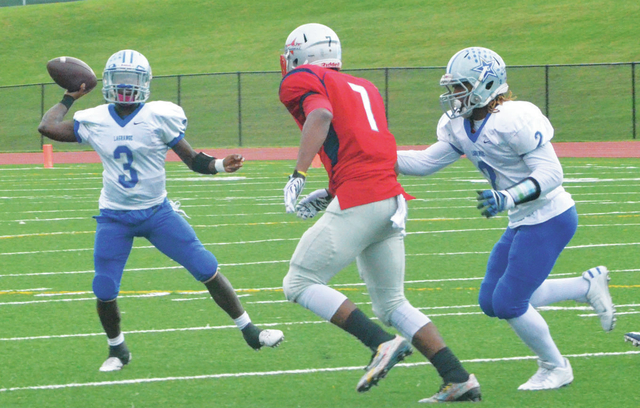 The Troup Tigers will go for their third straight win when they visit the LaGrange Grangers today. Kevin Eckleberry | Daily News LaGrange’s Derieko Smith, who has scored more than 30 points in the past two games, will lead his team against rival Troup today. Kevin Eckleberry | Daily News

http://lagrangenews.com/wp-content/uploads/sites/37/2015/12/web1_LHS1.jpgLaGrange’s Derieko Smith, who has scored more than 30 points in the past two games, will lead his team against rival Troup today. Kevin Eckleberry | Daily News The LaGrange Lady Grangers will look to bounce back from their first loss when they host Troup today. Kevin Eckleberry | Daily News

http://lagrangenews.com/wp-content/uploads/sites/37/2015/12/web1_LHS21.jpgThe LaGrange Lady Grangers will look to bounce back from their first loss when they host Troup today. Kevin Eckleberry | Daily News

LAGRANGE – They’ve won five consecutive games between them, so something will have to give tonight.

The rival LaGrange Grangers and Troup Tigers, who are both getting it done early in the season, will face off tonight for the first of two regular-season meetings.

The Grangers, under the direction of first-year head coach Mark Veal, have been extremely impressive so far, rolling to a 3-0 record, and they also handled Central-Carroll in a preseason game.

The Tigers, with third-year head coach Paul Brewer at the helm, dropped their season opener to Newnan, but they followed that up with wins over Harris County and Chattahoochee County.

LaGrange has been led by senior guard Derieko Smith, the defending Region 1-AAAAA player of the year who has scored 30 or more points in two straight games.

As effective as the Grangers have been early on, they figure to get a lot more dangerous when junior guard LaPerion Perry returns from a foot injury.

Along with senior Mike Hardy, Smith and Perry were starters on a team that won a region championship and made it to the state quarterfinals last season.

Other players including Gabe Duckeett and Qua Epps also saw significant playing time last season, but a handful of other players are getting their first taste of varsity action.

Included in that group is senior guard Alex Dantzler and junior guard Jerious Freeman, along with juniors Bryan Fanning and Kenan Gray, who have provided a formidable inside presence.

For Troup, the early-season games have afforded some inexperienced players a chance to get their feet wet.

Among those players are freshmen Keyshawn Russell and King Mwikuta, and sophomores Jarrious Jefferson, Montez Crowe and Makeon Heath

In Saturday’s win over Chattahoochee County, Jefferson was Troup’s second-leading scorer with 17 points, and Russell and Mwikuta each scored six points.

One of the team’s veterans, senior Isaac Moss, scored 18 points against Chattahoochee County, and fellow senior Dexter Shealey had 10 points.

It’s an inexperienced team when it comes to varsity playing time, but Brewer is extremely excited about what the future holds for the program with so many talented young players.

“We knew coming into this year that we’re going to be underdogs,” Brewer said. “But we think, watching our (junior-varsity) guys and watching our eight-grade guys, that the day of us being an underdog is wrapping up.”

In today’s girls’ game, it will be the Troup Lady Tigers putting their unbeaten record on the line.

Troup has opened its season with blowout wins over Harris County and Chattahoochee County, and everyone has contributed.

Nine of the 11 varsity players scored against Harris County, and everyone got into the scoring column against Chattahoochee County.

Shaqoya Gilbert, Kwyneshia Spence and Akhya Mitchell, a trio of veterans with a lot of playing time over the past few seasons, have led the way in scoring for Troup so far.

LaGrange began its season with two straight wins before dropping a close one to Woodward Academy on Tuesday.

Sophomore guard Aryan Dozier continued her strong start to the season with 19 points against Woodward Academy, and Shania Woodard did some great work inside with 19 points.

Had the Lady Grangers been a bit more productive from the free-throw line they likely would have won the game.

LaGrange’s players combined to make just 15-of-34 shots from the free-throw line, while Woodward Academy was 21-of-28 from the line.