Panthers take over in overtime 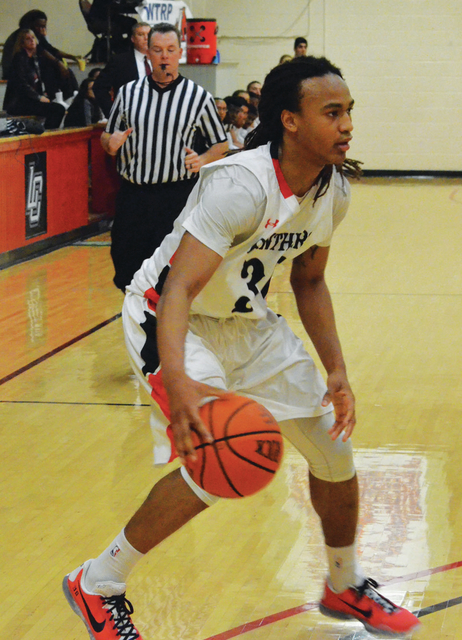 Drew Vanderbrook, who had 13 points and 12 rebounds, gets a shot away during the second half. Kevin Eckleberry | Daily News

http://lagrangenews.com/wp-content/uploads/sites/37/2015/12/web1_panthers7.jpgDrew Vanderbrook, who had 13 points and 12 rebounds, gets a shot away during the second half. Kevin Eckleberry | Daily News LAGRANGE – They needed five extra minutes to make it happen, but the LaGrange College Panthers took care of visiting Birmingham Southern 88-80 on Wednesday night to extend their winning streak to four games.

Birmingham Southern scored late in regulation to pull even, and when LaGrange College was unable to answer, it was on to overtime.

Birmingham Southern scored first in overtime, but LaGrange College quickly took control and ran away with it.

The Panthers (5-1) were led by Justyn Olson, a junior guard who scored 11 of his 29 points in the overtime period.

It was a career night for Olson, a LaGrange High graduate who is in his second season with the Panthers.

“My teammates did a good job of looking for me,” Olson said. “I was shooting the ball pretty good. The good thing about our team, we’ve got seven guys that can score 20 points on any given night.”

Olson had the hot hand in Wednesday’s game.

He got it done from the outside with three 3-pointers, and he also did a lot of his damage by driving to the basket.

Because of his aggressiveness, Olson got to the free-throw line 13 times, and he made eight of those attempts.

Olson saved his best for last.

Braxton Ford then connected for a 3-pointer with 3:47 to play, giving the Panthers a lead they wouldn’t relinquish.

“I knew we needed something to get us going,” Ford said of his go-ahead 3-pointer. “(Olson) drove in. I knew they were going to crash him because he was scoring. So I just stayed right over there, and I hit it. I knew after that we were going to win. Lots of times we just need one spark.”

For the rest of overtime, it was Olson’s time.

Birmingham Southern got a basket to get within one, and Olson answered with his third 3-pointer of the game, putting LaGrange College on top 80-76.

He made two free throws to push the lead to 82-76, and moments later he came up with a steal and converted a layup, and the Panthers were ahead by eight.

Olson capped his fourth-quarter scoring barrage with a pair of free throws with 13 seconds left in the game.

He was 1-for-6 from the field, and he only scored two points.

A week later, Olson came through with his highest scoring game as a college player.

“My last home game, I had a rough game,” Olson said. “(My teammates) said keep your head up.”

Olson missed a few shots early in Wednesday’s game, but he said head coach Kendal Wallace and his teammates kept supporting him.

“Coach Wallace, we talked a little bit, and he’s real good at giving players confidence,” Olson said. “If you feel like you’re feeling it, he says have confidence to shoot the ball. I missed a couple, and my teammates were like, keep shooting it man.”

Senior guard Mark Wagner added 16 points for the Panthers, and Drew Vanderbrook had a big game off the bench with 13 points and a team high 12 rebounds.

The Panthers are off to a flying start this season and a big reason for that is the balanced scoring.

Wednesday’s game was a great example of that.

Olson was averaging fewer than nine points per game before exploding against Birmingham Southern.

Wagner, Bonner, Ford and Mike White all have scoring averages in double figures, and Vanderbrook is scoring nine poitns a game.

“That’s one thing about this team that’s different from last year’s team, or the year before,” Ford said. “We have six different people on our team that can go out and score 20 points any night. We all share the ball. Nobody’s selfish, and that’s how we get the job done. It’s more like a family thing. It’s a lot easier when it’s like that.”

In the first half, with Olson, Wagner and Vanderbrook each scoring nine points, the Panthers surged to a 36-31 lead.

The Panthers led by as many as 12 points in the second half when Wagner made a 3-pointer with 13 minutes to play, but Birmingham Southern fought back.

With 55 seconds to play, Matty Rudak scored to give Birmingham Southern a 71-70 lead, but Wagner made two free throws with 44 seconds left to put the Panthers back on top.

Olson got a steal with 31 seconds left, and after getting fouled, he made one-of-two from the free-throw line to put the Panthers on top 72-70.

Rudak answered with a jumper with 15 seconds left to tie it.

Wagner got a shot away at the buzzer that didn’t fall, and while it looked like there may have been contact on the play, no foul was called, and it was on to overtime.

Ford said the Panthers didn’t let that play have any carry-over effect.

“We thought we got fouled on that last play,” Ford said. “It was like, OK, now let’s go. When we broke the huddle, I just said let’s go fellows. We’ve got five minutes.”

The Panthers then proceeded to dominant the overtime period, getting a big home win over a quality opponent.

“We’ve already overcome a ton of obstacles. I think we’re more prepared than we were anytime last year,” Olson said. “I love this team. I love everybody on it. I can’t say enough about my teammates. They’re just great. It’s awesome. It really is.”

LaGrange College will look to make it five in a row when it hosts NAIA foe Auburn-Montgomery on Saturday at 4 p.m.