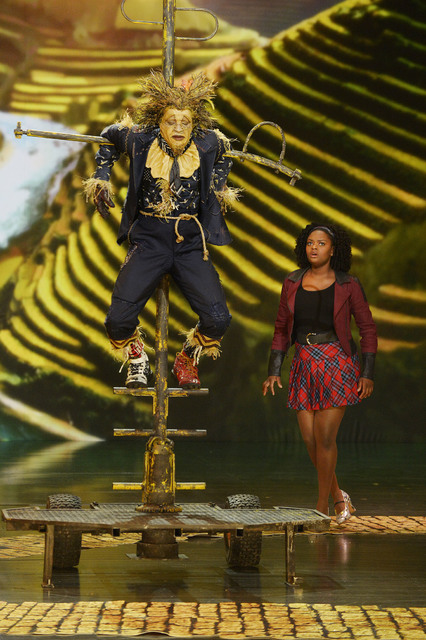 Elijah Kelley as Scarecrow encounters Shanice Williams as Dorothy in the NBC broadcast of ‘The Wiz Live’ on Thursday.

http://lagrangenews.com/wp-content/uploads/sites/37/2015/12/web1_WEB1206KelleyScarecrow02.jpgElijah Kelley as Scarecrow encounters Shanice Williams as Dorothy in the NBC broadcast of ‘The Wiz Live’ on Thursday.

NEW YORK — On Thursday, an estimated 11.5 million people tuned in to NBC and saw LaGrange native Elijah Kelley as the Scarecrow in the national broadcast of “The Wiz Live!”

“It was absolutely phenomenal,” said Evalene Flournoy of LaGrange, Kelley’s mother. “It was what I expected.”

She spoke with her son Friday morning. She said he has been responding to people’s reactions of the show.

“He’s excited about the outcome of it,” she said.

Flournoy and her husband of 27 years, Anthony, watched the live program together.

“He’s been a great supporter,” Flournoy said of her husband, whom she said has been a father figure for her children. “He’s been like a musical coach for my children. He’s been in the background, but he is one of the most inspiring persons they could ever have when it comes to music.”

Kelley’s singing was a focal point of the show. A review by Associated Press drama writer Mark Kennedy noted Kelley was among the male leads that shined in the performance, and noted his “athletic, loose-limbed Scarecrow,” who, among his performances, “gave us a funky ‘You Can’t Win’ while hoisted on a pole.”

“Some people wanted to know if it was a soundtrack, they didn’t believe he was actually singing,” Flournoy said. “But that’s how phenomenal it was. He was focused, and he said it just didn’t seem real.

“Fortunately, this has taken him to another dimension. He’s humbled because at some point in his life he realized he would reach this point. He feels like greater things are coming and he’s ready to go higher.”

Flournoy also said that more than her son’s talent has helped push him to this high point.

“I give God praise for everything that has transpired in our lives, speaking about what Elijah has done,” she said. “Our belief is built around knowing that God is the center. He’s everything in our lives. … I believe, I trust and I’ve seen his hand in my life on my children. It’s not coincidence that Elijah is where he is.”

The production more than doubled NBC’s typical audience for a Thursday night despite CBS airing a down-to-the-wire NFL game as competition. NBC said it had the network’s highest rating among children aged 11 and under since 2004.

The musical delivered the highest-rated Thursday night for any network since ABC’s premiere of “How to Get Away With Murder” last year, with the exception of sports programming.

Nielsen also said that 1.6 million individual tweets were sent out about the broadcast — far more than the previous two musicals, which both generated between 400,000 and 500,000 tweets.

NBC has scheduled a repeat showing of “The Wiz” for Dec. 19. The video, along with behind-the-scenes featurettes, photos and more is available at www.nbc.com/the-wiz-live

— The Associated Press Contributed to this report.