LaGrange, Troup give fans a show 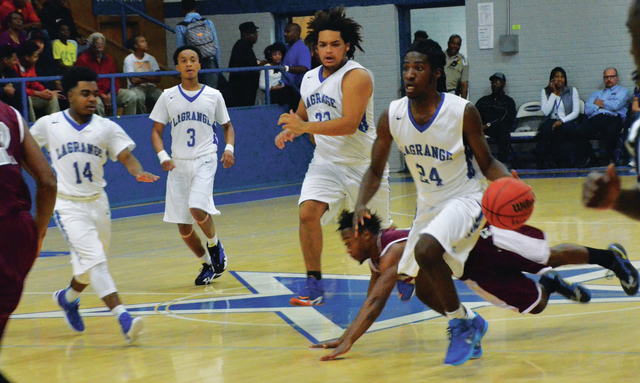 LAGRANGE – The LaGrange Grangers are still perfect, but the Troup Tigers made them work for their latest win.

Before a packed house on their home floor, it was the Grangers surviving for a 53-52 victory on Friday night to improve to 4-0.

The Tigers (2-2), who came into the game with a two-game winning streak, kept it close the whole game, and Jarrious Jefferson hit a 3-pointer at the buzzer to make the final deficit one point.

Derieko Smith had a big game for the Grangers with 20 points, and he had 10 points in the fourth quarter to help his team hold off the Tigers.

No one else was in double figures for the Grangers, but nine players scored.

Jefferson, a sophomore guard, made three 3-pointers and finished with 17 points to lead Troup.

“It’s a rivalry game, and they’ve improved greatly,” LaGrange head coach Mark Veal said. “We saw them at Harris County, and that was a good win for those guys. They had a good game plan, and we didn’t adjust to some things well, and it was an off night shooting for us. You’re always going to be tested. (Troup) did a wonderful job tonight, and luckily we were able to win it.”

For Troup, although the night didn’t end with a win, it was an encouraging effort.

Most of the players are getting their first major taste of varsity action, and they stood their ground and played well and had a chance to get the road win.

“We went toe-to-toe against a very well-coached team, against a very explosive team,” Troup head coach Paul Brewer said. “I felt like we controlled the tempo tonight, and that’s what we had to do to stay in the game. We’re going to build off that.”

After falling behind 6-2 early, the Tigers took a 9-8 lead after the first quarter.

It remained tight in the second period, and Troup took a 20-19 lead when Tremayne Tolbert scored after pulling down an offensive rebound with 1:34 left in the half.

Smith answered with a basket to give his team a one-point lead, and the senior guard then made three free throws to push the lead to 24-20.

LaPerion Perry hit a 3-pointer at the halftime buzzer to give LaGrange a 27-21 lead.

The Tigers got within a point when Jefferson made a 3-pointer one minute into the second half, but Jerious Freeman answered with a 3-pointer of his own to put the Grangers back up by four.

Kenan Gray, a 6-foot-6 junior, then provided one of the night’s top highlights with a powerful dunk to give LaGrange a 32-26 cushion.

Troup hung tough, though, and by the close of the quarter LaGrange’s lead was 36-32.

The Grangers had the lead the entire fourth period, but they were never comfortable.

The Tigers got within two when Tolbert scored with 6:10 to play, but Smith’s three-point play moments later put the Grangers back up by five.

The Grangers couldn’t shake the Tigers.

Back came the Grangers with five straight points, and another three-point play by Smith gave his team a six-point lead with 1:18 to play.

LaGrange’s lead was seven when Troup’s Makeon Heath made a 3-pointer with 20 seconds to play, and it was a four-point game.

After Smith made a free throw, it was Keyshawn Russell connecting from long distance for another 3-pointer, and with 11 seconds remaining, LaGrange’s lead was just two points.

LaGrange senior Mike Hardy was fouled on the other end, and he made two clutch free throws, and Troup’s deficit was four points.

Jefferson ended the game with a flourish with a 3-pointer, but Troup came up one point short.