Hoops season continues to heat up with busy week 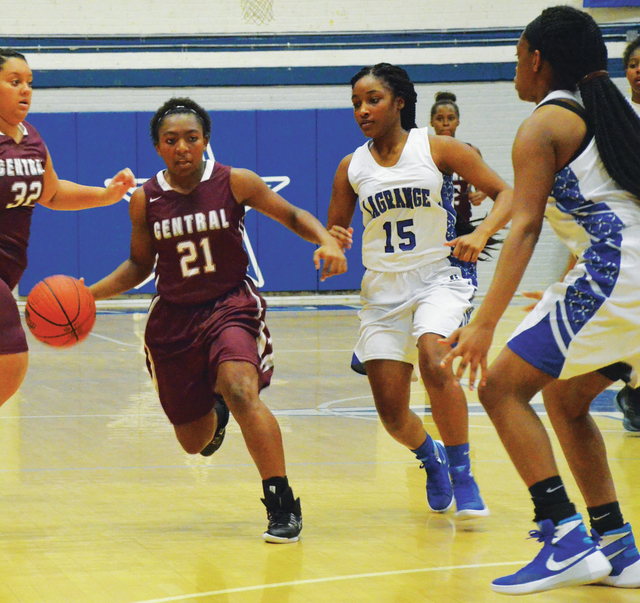 LaGrange’s Gabe Duckett gets a shot away during Friday’s 53-52 win over Troup. LaGrange will carry a 4-0 record into Tuesday’s game at Whitewater. Kevin Eckleberry | Daily News

http://lagrangenews.com/wp-content/uploads/sites/37/2015/12/web1_LHS12.jpgLaGrange’s Gabe Duckett gets a shot away during Friday’s 53-52 win over Troup. LaGrange will carry a 4-0 record into Tuesday’s game at Whitewater. Kevin Eckleberry | Daily News

LAGRANGE – Their perfect record will be put to the test this week.

After Friday’s hard-fought 53-52 victory over the Troup Tigers, the LaGrange Grangers are 4-0 on the young season, and they’ll have two challenging road games this week.

First up will be Tuesday’s game against a 5-2 Whitewater team, and LaGrange will then visit the rival Callaway Cavaliers on Saturday.

After back-to-back games of winning by double digits, LaGrange was pushed to the limit by Troup on Friday.

Derieko Smith scored 20 points, including 10 points in the fourth quarter, to help LaGrange get the close win.

Troup, which is 2-2 after Friday’s near-miss, will visit Manchester on Tuesday before hosting Heard County on Friday.

The Tigers came into the LaGrange game having won two in a row, and they nearly made it three straight.

The Tigers got as close as two points with 10 seconds remaining when Keyshawn Russell made a 3-pointer.

After Hardy’s two free throws made it a four-point game, Jarrious Jefferson drilled a 3-pointer at the buzzer, but the Tigers came up one point short.

Jefferson, a sophomore guard, had a terrific game against LaGrange with 17 points, and he had seven points in the fourth quarter.

Troup will look for a better effort from the free-throw line this week after making just 12-of-24 from the line against LaGrange.

The Callaway Cavaliers, who kicked off their season with a 75-52 road win over Greenville, will be away from home again on Tuesday to play Valley (Ala.).

After Tuesday’s game against a winless Valley team, Callaway will gear up for the showdown against LaGrange.

Those teams played two thrilling games a year ago.

Callaway won the first meeting 71-69, but LaGrange bounced back to win the rematch 80-78.

In girls’ basketball this week, the LaGrange Lady Grangers will put their 3-1 record on the line against a 4-3 Whitewater team on Tuesday before traveling to Callaway on Saturday.

The Troup Lady Tigers (2-1), meanwhile, will look to bounce back from their first loss of the season.

Shaqoya Gilbert had a big game for Troup with 22 points, and Kiya Fulton scored nine points.

Troup struggled mightily from the free-throw line in the game, making just 10-of-31 attempts.

The Lady Tigers will have road games against Newnan today and Manchester on Tuesday before hosting Heard County on Friday.

Callaway’s girls’ team, which began its season with a 50-39 loss to Greenville, will look for its first win when it visits Valley on Tuesday.

Callaway then makes its home debut on Saturday against LaGrange.

In private-school basketball this week, LaGrange Academy’s teams will be busy with three games.

LaGrange Academy ends the week with home games against Furtah Prep on Friday.

Lafayette Christian School’s teams will have a pair of home games this week.