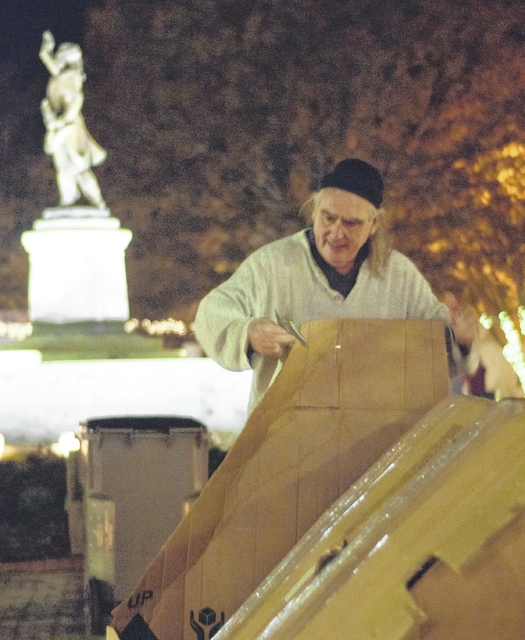 Doug Roberts of West Point sets up his temporary shelter during a homelessness simulation Friday on Lafayette Square.

http://lagrangenews.com/wp-content/uploads/sites/37/2015/12/web1_Homeless.jpgDoug Roberts of West Point sets up his temporary shelter during a homelessness simulation Friday on Lafayette Square.

LaGRANGE — A cardboard city sprang up Friday on Lafayette Square as community members sought to raise funds for Emmaus Shelter and awareness of area homelessness.

More than a dozen people set up temporary shelters and tents to brave the evening’s cold weather. Jessica David, an organizer of the event and director of the Emmaus Shelter, said the happening was an important step for people to understand the area’s challenges with homelessness.

“I heard that someone from this town said we don’t have a homeless problem. I said, ‘I beg your pardon? Why are there 40 people sleeping in my shelter?’” David said.

The event was part of a collaboration between Emmaus Shelter and the Troup County Homeless Coalition, and David hopes the event will inspire more churches, businesses and individuals to get involved. During a January count of people who are homeless or near homeless, David said she found about 1,200 people. That number includes people who are living in hotel rooms paid for by someone else and other forms of temporary housing, David said.

Not everyone who is homeless is a drug addict or a derelict, David said. She’s frustrated by that characterization.

“People don’t necessarily become homeless because they’re addicted,” she said. “There’s a guy helping me here tonight that poked his eye out on the job. It was a successful person who just didn’t have workman’s comp.”

Jeremy Whatley, a 25 year old who is staying at the Emmaus Shelter, was one of the dozens of people who came to Lafayette Square on Friday to help raise awareness. He turned to Emmaus about a month ago for help trying to get back on his feet after difficulties, he said.

“I was trying to be a bigger man and make something of myself,” Whatley said. “Going to a shelter was a step that I took to get out of the cold. They’ve been working with me, trying to help me get a job. It’s been a blessing staying there while I try to move forward.”

Although Whatley wasn’t among those who spent the night on the square — he’s done his time outside, he said — at least a dozen people did, all of whom paid a $25 registration fee. David said she hopes more people will understand the problem facing Troup County.

“I hope people will gain more sympathy from the community to realize the lack of affordable housing that’s causing this problem,” she said. “The selfishness is triggering the eviction of people so frequently. Nobody asks to be homeless. It’s the conditions of their lives that causes it.”

David hoped that more people would see the event and get involved in the solution.

“We hope that this will be a good bonding time for all of the people who have become active and that we’ll find encouragement from one another to stay positive and active in our community,” she said. “We hope more volunteers will come so we can make a difference in our community.”