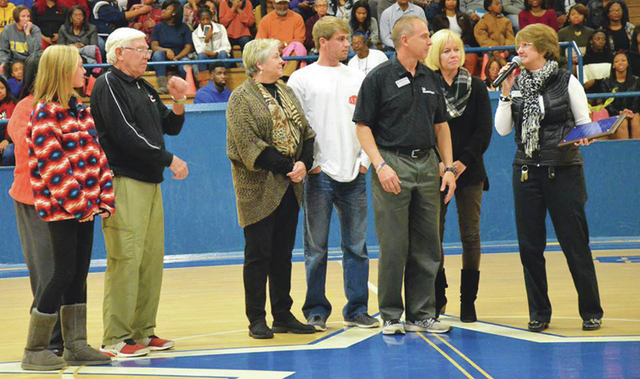 Former LaGrange High basketball coach Mike Pauley, who is now the school’s athletic director, is greeted by his former players before Friday’s game against Troup. Pauley was honored for his 20 seasons as LaGrange’s basketball coach. Kevin Eckleberry | Daily News

http://lagrangenews.com/wp-content/uploads/sites/37/2015/12/web1_pauley.jpgFormer LaGrange High basketball coach Mike Pauley, who is now the school’s athletic director, is greeted by his former players before Friday’s game against Troup. Pauley was honored for his 20 seasons as LaGrange’s basketball coach. Kevin Eckleberry | Daily News LAGRANGE – For two decades, Mike Pauley was the man calling the shots for the LaGrange High boys’ basketball program.

Pauley, a 1984 graduate of LaGrange High, led the Grangers to a region championship and a berth in the elite eight in what turned out to be his 20th, and final season season as the team’s head coach.

Following that successful 2014-2015 season, Pauley stepped down as head coach to take over as the school’s athletic director, and his former job was turned over to his long-time assistant, Mark Veal.

On Friday night, Pauley was going about his business, tending to his athletic-director duties when he was asked to step out onto the court before the boys’ game between LaGrange and Troup.

Pauley had no idea what was going on, although he knew something was up when he saw members of his family walking down toward the court.

Pauley and his family went to the middle of the court, and LaGrange High principal Penny Johnson presented him with a plaque recognizing his 20 years as the Grangers’ head coach.

“I had not one ounce of an idea what was happening,” Pauley said.

Then came the unscripted part.

The members of the LaGrange boys’ basketball team walked out onto the court to greet their former coach, to let him know how much he meant to them.

Much as if they were getting fired up for a game, Pauley and the players huddled together, they cheered, and they jumped up and down.

It was an impromptu moment, and it meant the world to Pauley.

“I got real emotional when those kids all grabbed me, and hugged me, and told me they love me,” Pauley said. “I almost get teared up thinking about it.”

Pauley said he was glad the hundreds of fans in attendance got to witness that moment, to get a glimpse at what the relationship between a coach and his players is like.

“When those boys hugged me on the floor, all I could think of was the love we all share, and the passion for the game, and the friendships and all that,” Pauley said. “Everybody in the stands got to see us hug. I thought, how healthy is that? That’s all I could think of. I wasn’t a white guy, or a black guy. I was their coach They’re not black players or white players. They’re my players, my friends. And that’s what sports does. Sport, it trancsends age, and it transcends all of that. That’s why we do it.”

Pauley enjoyed an enormously successful tenure as a basketball coach at LaGrange.

He won more than 400 games, and his teams won multiple region titles and made a handful of deep runs in the state tournament.

Most notably, the 2009-2010 team only lost one game, and that came in the state-championship game against Columbia High.

Pauley also had a stint as the girls’ coach, and he enjoyed success in that role as well.

Pauley also coached cheerleading and tennis during his time at LaGrange High.

He got the opportunity to coach his son Jake in basketball and tennis, and his daughter Emily in cheerleading.