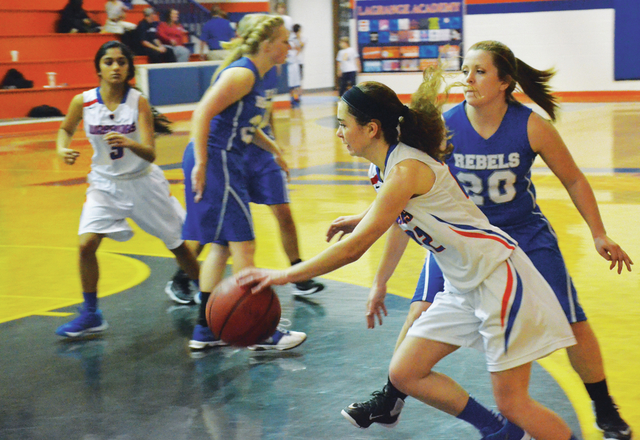 LAGRANGE – He knew it was going to be a struggle.

Last season, the LaGrange Academy Lady Warriors were a veteran team, and they ended up winning a region championship and advancing to the second round of the GISA state tournament.

As the Lady Warriors prepared for a new season, head coach Mike Petite was tasked with replacing nearly everyone of the players responsible for that success.

With so many new players, Petite figured the team would take some lumps in the early going, and that has been the case.

With Monday’s 59-19 loss to Chambers Academy, LaGrange Academy is 0-6, but Petite said everyone of the players is committed to getting things turned around.

“You don’t want to see an 0-6 record, but I’ll give it to them, they’re not down,” Petite said. “They haven’t quit, they’re not upset or pointing fingers or mad. They’re like, we’re trying coach, and they are, and I give them credit for that. These guys come back every day, no matter what.”

As tough as things have been, Petite is optimistic about the long-term prospects.

LaGrange Academy has only played one region game, and that was against Oak Mountain, which is the favorite to win the region championship.

Petite believes his team could end up fighting for the second spot behind Oak Mountain.

“Oak Mountain is probably going to be better than everybody else,” Petite said. “They’ve got a couple of senior girls that are good. And then, it’s everybody else. While we’re probably a little lower than Flint River, if you play a good hard game against them, and make it hard for them to score and knock down a couple of shots, all the sudden you’re in it.”

One of the team’s few veterans is Leah Major, and she scored 12 of her team’s 19 points during Monday’s game.

Laney Anderson played a fair amount last season as well, and she led the team in scoring in Friday’s loss to Oak Mountain.

Major and Anderson have both had some productive offensive games this season, but they haven’t done it at the same time.

“We need to get them both scoring at the same time,” Petite said.