Tigers look to build on close loss to Grangers 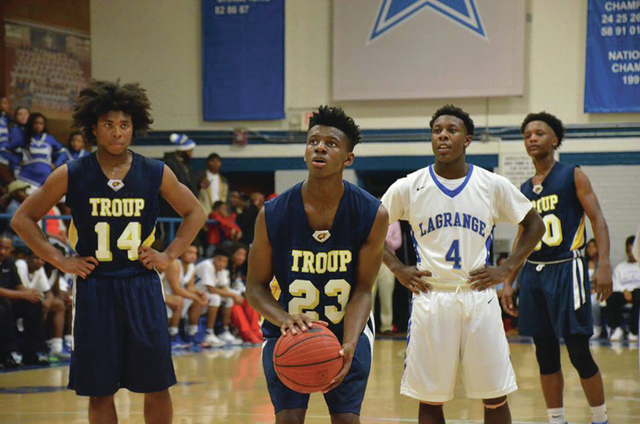 Troup’s Isaac Moss gets ready to shoot a free throw during Friday’s game against LaGrange. Troup hung tough the whole way and lost 53-52. Troup will look to get a road win against Manchester today. Kevin Eckleberry | Daily News

http://lagrangenews.com/wp-content/uploads/sites/37/2015/12/web1_troup22.jpgTroup’s Isaac Moss gets ready to shoot a free throw during Friday’s game against LaGrange. Troup hung tough the whole way and lost 53-52. Troup will look to get a road win against Manchester today. Kevin Eckleberry | Daily News

LAGRANGE – As the Troup Tigers prepared for Friday’s showdown with the LaGrange Grangers, head coach Paul Brewer wasn’t sure how his inexperienced team was going to respond to such a raucous atmosphere.

Brewer, who is in his third season as Troup’s head coach, knows what the games with LaGrange are like, and he cautioned his players to not let the crowd impact how they played.

“In an environment like this, it’s real easy to get ahead of yourself, and before you know it it’s a 12 or 15-point game,” Brewer said.

“We told them you have to survive the first three minutes,” Brewer said. “They’re going to try to knock us out, and they didn’t.”

It remained close the rest of the way, and Troup had a great chance to pull off the big road win.

Still, it was an encouraging effort for a Troup team that is looking to get things going in the right direction after a few difficult seasons.

Most of the Tigers are getting their first taste of significant varsity playing time, and some of the top contributors are freshmen and sophomores.

Troup’s top player in Friday’s game was a sophomore guard, Jarrious Jefferson, who had a team high 17 points.

Two other sophomores, Makeon Heath and Montez Crowe, combined to score 11 points, and freshman Keyshan Russell added five points and hit a late 3-pointer that kept the Tigers in the game.

Seniors Dexter Shealey, Tremayne Tolbert and Isaac Moss provide a veteran presence, but it was a relatively inexperienced team that took the court Friday night.

Despite that inexperience, the Tigers played with poise, and Brewer said the players did a great job of following the game plan.

Brewer didn’t want to get into a running contest with the Grangers, and he wanted to keep the score low, which was what happened.

“I felt like we controlled the tempo,” Brewer said. “That’s what we have to do to stay in the game.”

There was one area where the Tigers came up short.

Troup’s players did a nice job of getting to the free-throw line, but they had a difficult time making those shots.

The Tigers were only 12-of-24 from the free-throw line, while the Grangers were 15-of-23 from the charity stripe.

Those points were obviously critical in a one-point game.

“We felt like with the foul shot opportunities we had, the game was ours to win,” Brewer said. “We felt like if we did what we should have done, we could have come in here and stole one. But they earned the game. They made the plays they had to.”

The Tigers will have two more games this week as they look to get some wins on the board.

The Tigers will get another shot at the Grangesr on Dec. 18, and that game will be played at Troup.