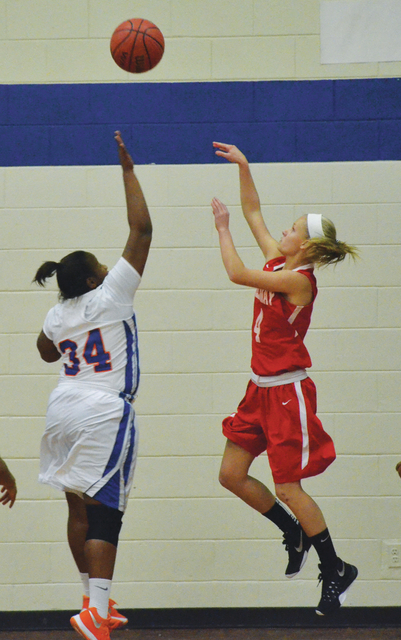 http://lagrangenews.com/wp-content/uploads/sites/37/2015/12/web1_CHS20.jpgCallaway’s Kelly Carlisle gets a shot away during the second half. Carlisle scored 10 points, all in the second half. Kevin Eckleberry | Daily News

VALLEY – They had some momentum.

After falling behind by 12 points in the second half against Valley, the Callaway Lady Cavaliers got within seven points late in the third period.

The comeback effort stalled at that point, though, and Valley pulled away for a 57-37 victory on its home floor.

“When you’re playing from behind, it takes a whole lot of energy to catch up,” Callaway head coach Deyano Martin said. “Then once you catch up, everything has to continue to go well. We ran out of gas, they hit a few baskets here or there, and they ended up extending the lead again.”

Callaway fell to 0-2, but Martin said both games were valuable because of the experience his players gained.

“We got a lot of young girls to play,” Martin said. “They got a lot of minutes. I think those minutes will be big, come January (when region play begins). I’m going to continue to play a lot of players, and we’ll keep searching for continuity.”

It was a low-scoring first half.

The Lady Rams started to create some separation in the third period.

With less than three minutes to play in the third quarter, Valley’s lead was 30-18, and that’s when Callaway’s Kelly Carlisle got hot.

Carlisle, who is in her first season on the basketball team, scored five consecutive points, and her 3-pointer with 1:30 left in the third period cut Valley’s lead to 30-23.

Valley scored the next four points to take a 34-23 lead into the final quarter.

Once again, Carlisle hit a couple of shots to get Callaway within shouting distance.

She made a 3-pointer moments into the fourth period to make it an eight-point game, and Carlisle scored again with 7:30 left in the game to trim Valley’s lead to 34-28.

The Lady Cavaliers got the ball back still down by just six points, but they turned the ball over, and the Lady Rams took over from there.

After getting within six early in the fourth quarter, Callaway was outscored 23-9 the rest of the way.

Alexus Scott led Callaway with 12 points, and Carlisle added 10 points, all in the second half.

Callaway will look for its first when when it hosts LaGrange on Saturday at 6 p.m.