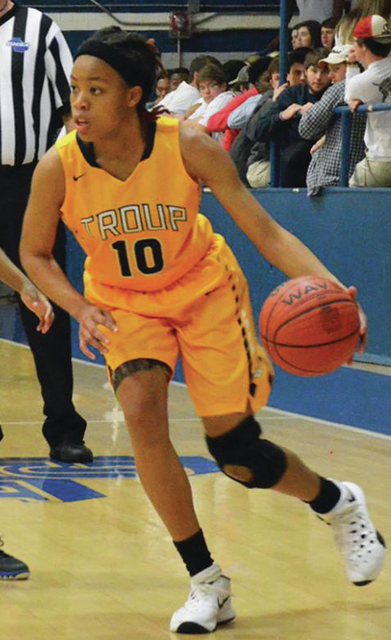 MANCHESTER – The Manchester Blue Devils were rolling on their home floor.

Midway through the fourth period, Manchester had a 15-point lead against the visiting Troup Tigers.

The Tigers may have been down, but they were a long way from out.

Troup mounted a furious comeback over the final four minutes of the game to beat Manchester 67-65 to improve to 3-2.

Troup has won three of its past four games, and the one loss during that stretch was a heart-breaker at LaGrange on Friday.

Troup played well and had a chance to win, but it was LaGrange escaping with a 53-52 win.

“We lost a good one at LaGrange,” Brewer said. “We can talk about it and pump them up and tell them it was a great game, but if you don’t get that gratification of winning, it doesn’t quite mean as much.”

Troup was able to get that gratification on Tuesday thanks to the big comeback.

Junior Grant Whitley hit a big 3-pointer with a little more than 10 seconds left to tie the game.

After a Manchester timeout, Troup came up with a steal, and sophomore guard Jarrious Jefferson hit the game-winning shot with a few seconds left.

Brewer called for a press after Whitley’s 3-pointer, and that decision paid off.

“We elected to go ahead and use the press we hadn’t used all year,” Brewer said. “Let’s not play for overtime. And we stole one and laid it up and won the game. So it worked out for us.”

Kwyneshia Spence led the way for Troup with 22 points, and she made three 3-pointers and was 7-of-9 from the free-throw line.

Troup outscored Manchester 15-4 in the third period to put the game away.

Troup’s teams will be at home on Friday against Heard County.