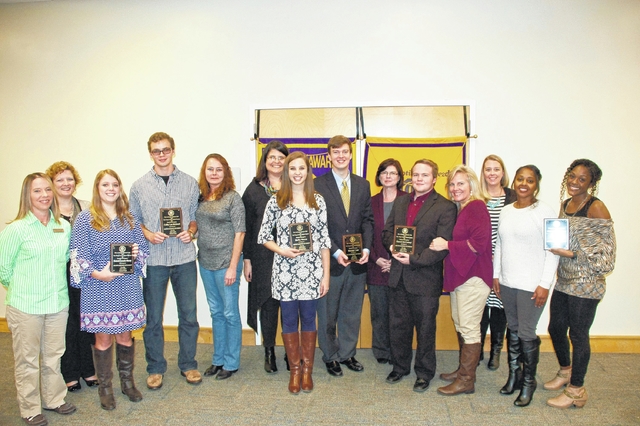 The chosen Outstanding Students by the LaGrange Optimist Club stand with their parents during Monday’s meeting and award ceremony.

http://lagrangenews.com/wp-content/uploads/sites/37/2015/12/web1_1208OutstandingStudents.jpgThe chosen Outstanding Students by the LaGrange Optimist Club stand with their parents during Monday’s meeting and award ceremony.

“The motto of the optimist club is ‘the friend of youth,’” said Scott Cook, head of the club’s Outstanding Students committee. “… Being an optimist is having faith and confidence in the youth of today that are going to be tomorrow’s future, and doing anything and everything we can to help them achieve all their goals.”

The club every year chooses a male and female student each from Callaway, LaGrange and Troup high schools. The club rotates its basis for the award among three categories on an annual basis: academic, athletic and all-around outstanding students. This year’s focus is academic.

Cook, a former teacher, introduced each of the students and read the accomplishments for which they were nominated. The students honored were, in alphabetical order by school name:

A senior at Callaway High School, McCartney is a LaGrange native, a member of the CHS varsity soccer team and part-time employee of Chic-fil-A on Lafayette Parkway. He said he enjoys being part of the youth group at Clearview Chapel, where is a member.

He plans to attend either the University of North Georgia or Mercer University to major in criminal justice. He wants to become a detective before going back to school to pursue a masters degree. He said his mother, father and grandmother have inspired him to never give up, “no matter what,” and he will carry that inspiration with him.

A Callaway High School student, Reeves is chief editor on the school’s yearbook committee, vice president for the CHS chapter of Future Business Leaders of America and is in her third year as a varsity swimmer for the school’s team. She said she is proud of her club affiliations.

Reeves said she plans to carry on her studies at a “highly acclaimed” university, and reach her goal of becoming an orthodontist and opening a practice in LaGrange. She credited her parents for encouraging her to be involved in as many activities as she could to learn more about the world around her.

Todd, a LaGrange High School student, was selected to attend the Governor’s Honor Program, to which he credits his most outstanding academic achievements. He and peers created a Tesla coil as part of the program without any instructions on how to accomplish the task.

Todd recently was named a National Merit semi-finalist. His extracurricular activities include singing in the Young Singers of West Georgia, participating in the Robotics Club at LHS, captain of the academic bowl team, president of the LHS Service Club, member of the student council, National Honor Society and city of LaGrange Youth Council.

A student at LaGrange High School, Warren has taken advanced placement classes in every subject area and college courses on subjects not offered at the AP level. She maintained straight A’s throughout high school and earned numerous awards.

She has been a member of the cheerleading team, dance team, chorus and drama club with leadership roles in many of the groups. She was chosen to serve on the Youth Leadership Council of the LaGrange-Troup County Chamber of Commerce and city of LaGrange Youth Council. She has participated every year in Camp Viola, and has served in her church’s praise band, Winshape Camp, West Georgia Health Center and was a short-term missionary in Uganda. Her passion is musical theater, in which she plans to major at college, and she dreams of performing on Broadway.

A senior at Troup High School, Wheeler was noted by nominating teacher Niki Watts as a natural leader, skilled orator, amazing writer and gifted rhetorical analyst with a strong sense of civic responsibility and a love of learning.

“She earns the respect of her classmates by leading by example and encouraging others to work at their highest level of … capabilities,” Watts wrote in her nomination.

Bridwell is a Troup High School student with a 3.9 GPA and “an incredibly bright and charismatic young man,” according to nominating teacher Michelle Ashmore. He has taken several advance placement courses in US government and politics, US history, statistics and psychology. Ashmore also noted his “genuine empathy,” always willing to help other students.

He has been a member of the National Honor Society, student council and student class officer. He has been a part of the baseball program since 2012, “serving as an integral member of the team as well as a natural leader,” Ashmore wrote in her nominating leader.

Each of the students received a gift basket donated by Chic-fil-A.