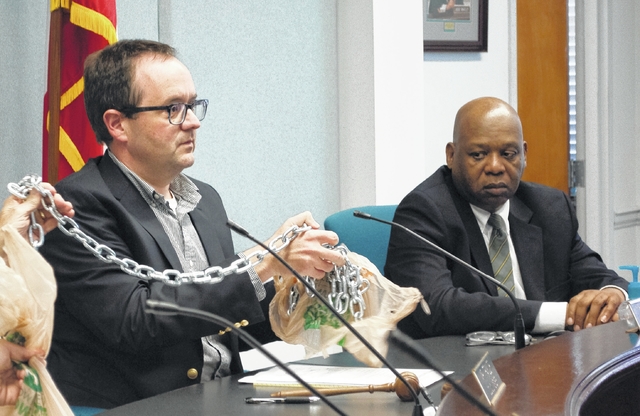 LaGrange Mayor Jim Thornton, left, holds chains brought by a woman seeking a city ordinance change regarding the tethering and trolleying of dogs as Councilman LeGree McCamey looks on during a September meeting.

http://lagrangenews.com/wp-content/uploads/sites/37/2015/12/web1_CMYKCityCouncil.jpgLaGrange Mayor Jim Thornton, left, holds chains brought by a woman seeking a city ordinance change regarding the tethering and trolleying of dogs as Councilman LeGree McCamey looks on during a September meeting.

LaGRANGE — Chaining a dog outside is now illegal citywide following a new ordinance approved by City Council on Tuesday.

The vote divided City Council with members Norma Tucker, LeGree McCamey and Willie Edmondson voting against the proposal. Members Tom Gore, Bobby Traylor and Nick Woodson voted in favor and Mayor Jim Thornton broke the tie in favor. It is the first time in his tenure Thornton has broken a tie.

Although the ordinance took effect immediately, City Manager Tom Hall said there will be an educational period during which law enforcement may issue warnings rather than seek civil action. Following the educational period, violators could be subject to fines or community service, Hall said.

The ordinance, titled “Tethering of Dogs,” prohibits direct-point chaining, also called tethering, and requires dog owners to ensure their canine is “securely and humanely enclosed in a proper enclosure.” Direct-point chaining is the practice of securing an animal to a cable or chain and affixing that cable or chain to a single point, such as a stake in the ground or a tree.

In lieu of chaining, dog owners may provide a “proper enclosure,” which may include fenced-in areas, buildings, pens or electronic animal confinement systems from which the animal cannot escape by climbing, digging or jumping.

The use of trolley systems is an acceptable alternative to fences under the new ordinance. Trolley systems suspend a cable between two points, usually posts or trees, and have a secondary cable attached to a pulley that allows the dog to run the length of the suspended cable.

Only one dog may be attached per trolley and the system must be made of a cable that cannot be chewed through. The system cannot weigh more than 25 percent of the dog’s total body weight. The running cable line must have a swivel attached at each end and be attached to stationary objects that cannot be moved by the dog.

The running cable line must be at least 10 feet long and be positioned sufficient distance from any other objects that may lead to tangling of the cable or lead line. The line must also not extend over any edge or object that could result in the dog’s strangulation.

Use of a collar to attach the dog to a trolley system is also illegal under the law. Dog owners must instead use a harness.

“Earlier this year, I brought this issue to you about the tethering because of two dogs I saw chained up all the time,” she told the council Tuesday. “I don’t know what else to say or do to get you to see this is wrong. There are so many other options out there and it doesn’t matter what you vote, I know it’s wrong.”

Council members McCamey and Edmondson said they voted against the measure because they were unsure of how effectively it could be enforced.