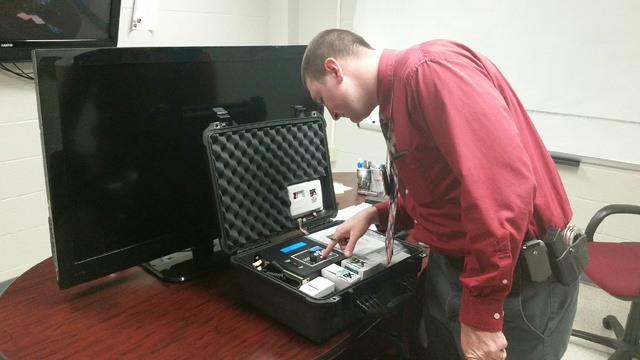 LaGrange Police Sgt. William Nelson shows one of the security devices the department uses inside bait homes and cars to catch thieves. The wireless alarms are transportable and transmits a message on police radio to alert officers of a break-in.

http://lagrangenews.com/wp-content/uploads/sites/37/2015/12/web1_20151208_105716.jpegLaGrange Police Sgt. William Nelson shows one of the security devices the department uses inside bait homes and cars to catch thieves. The wireless alarms are transportable and transmits a message on police radio to alert officers of a break-in.

LaGRANGE — Officers and investigators with the LaGrange Police Department are stopping criminals in their tracks by keeping track of the offenders when they break the law.

According to Sgt. William Nelson with LPD’s Criminal Investigation Section, the department arrested 10 suspects during a two-month sting operation to combat a rash of entering autos and burglaries in certain neighborhoods around the city.

Nelson said the department set up 10 bait cars and at least one bait house – armed with wireless alarms known as “Look Out Portable Security” devices.

The equipment is similar to a home alarm system, except it is transportable and can transmit a pre-recorded message over the police radio to alert officers that someone has broken into the home or car, Nelson explained.

“Our crime analyst monitors the police reports coming in, what citizens are telling us, plus tracks areas that have been identified as having ongoing issues,” Nelson explained. ” Plans are then formulated (within the department) to use wireless alarms in these areas. We let officers know, then we go out, set the items out and see if we have any response.”

There have been six ongoing operations set up mainly on the northeast side of LaGrange off Hogansville Road and the Youngs Mill Road area, Nelson stated.

He said the burglary details helped police catch five suspects, including two juveniles allegedly breaking into a concession stand at Callaway Stadium, a male police said they caught breaking into a home on Camelot Drive, an alleged prowler found at the same home at a different time and another male seen leaving the area near that home whom police later questioned, searched and allegedly found drugs on.

One person was arrested allegedly trying to break into a car at a church off Clark Street, another area that has seen a sharp increase in those types of crimes, said Nelson. The downtown area has also had some issues of entering autos, he added.

In the bait houses, investigators used equipment such as TVs, computers, purses, bags — anything of perceived value — and placed GPS devices inside the items. Nelson said that way if the goods were stolen and the offenders managed to get away, there was still another way for police to track them.

Another technique deployed by the department was the use of luminescent paste.

“We put the paste on items and it dries clear. If we catch people with the items that were stolen … we put their hands under a black light. If they glow, we know it is evidence that they touched the items,” Nelson explained.

He said the department will continue to utilize their undercover operations and equipment. Nelson made it clear police plan to set up another bait house within the city this week.

“It’s also a powerful deterrent when criminals know that we have these items,” Nelson added. “They might think twice before they take something because it might be us who set it up.”

But the department’s officers also played an integral part in suppressing the crime in those affected areas and throughout the community.

According to Nelson, patrol officers conducted 38 concentrated patrols, meaning they saturated high-risk areas of town, and performed 19 foot patrols. In some instances, the officers would swap out shifts, patrol cars and gear in the middle of these neighborhoods to make sure there was a constant presence on the city streets.

“A lot of times, people think officers are just sitting in an area or just looking for something,” Nelson said. ” Usually they are talking with people and asking them, ‘What are you seeing?’ They’re actively engaging the community. … There is a direct correlation between actively engaging the community and lowering crime, and taking care whatever concerns those citizens may have in those areas.”

Nelson said the city has seen a sharp decrease in the amount of burglaries and entering autos since the department started its concentrated patrols and details.

Starting on Nov. 1, as officers were beginning to implement the details, there were 63 burglaries reported and 43 entering autos.

Since the last concentrated effort on Nov. 22, Nelson said the number of burglaries reported has dropped to 26 and reported entering autos to nine.

But he said even one crime is one too many. Police will continue to be out in force, especially throughout the holiday season.

“Traditionally between Thanksgiving and Christmas we do see an increase in entering autos and burglaries. But we’re definitely not seeing an increase now. I credit that to the details and the patrols the officers run on a daily basis,” he said. “We may modify our plan. We may use houses, we may use businesses. It depends on what is needed.”