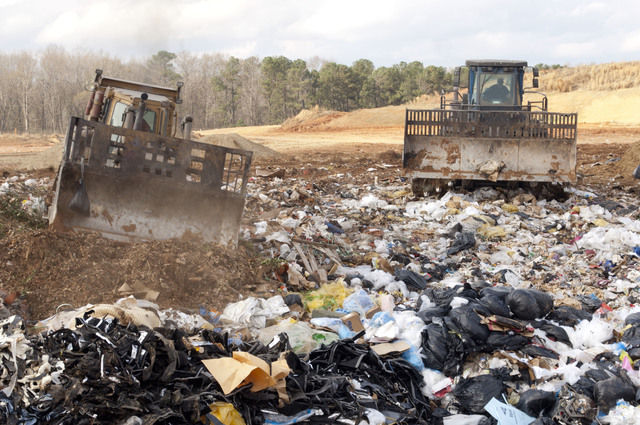 Earth-moving equipment pushes trash at the city landfill off Greenville Road on Friday. A new free, curbside recycling program could result in as much as a 40 percent decrease in throw-away trash if every resident in LaGrange participates.

http://lagrangenews.com/wp-content/uploads/sites/37/2015/12/web1_Recycle.jpgEarth-moving equipment pushes trash at the city landfill off Greenville Road on Friday. A new free, curbside recycling program could result in as much as a 40 percent decrease in throw-away trash if every resident in LaGrange participates.

Ronnie Cantrell, the city’s public works manager, estimates that number could be slashed by as much as 40 percent if everyone in LaGrange takes advantage of a new, free curbside recycling program launching in mid-January.

“Most of what’s not recyclable is organic waste,” he said. “That’s the stuff that breaks down.”

Under the new city program, some of what doesn’t break down can be recycled using new bins the city will deliver to residents at no charge. All recyclables but glass — including metal, plastic, paper and cardboard — can be thrown in the recycle bins and the city will pick them up for free.

City Manager Tom Hall said glass won’t be included in the recyclables because it would shatter in compactors, posing a risk to people who will sort the refuse. Plus, he said, “glass is made of sand, and that’s pretty much an infinite resource at this point.”

Recyclers won’t have to fuss with sorting their waste by paper or plastic, Hall said. By using a method called “single-stream recycling,” participants can simply throw all of their reusable junk into city-issued bins, bring it to the curb and forget it.

Residents can reserve their recycle bin now — but it comes with a catch. At a cost of about $50 each, the city wants to make sure the folks who ask for the cans actually follow through and use them.

“If you order a can, you have to use it,” Hall said. “Or else, we’re going to charge you for the cost of the can.”

Hall said a little fewer than 100 people have signed up for the new recycling program so far, but he hopes participation will pick up as more people learn about it.

No exact date in January has been set for the program’s beginning, but Hall said as the cans are delivered, instructions will go out for people to learn about when they’ll need to roll their new blue recycling bin to the curb.

Most likely, Hall said, recycling pick up will be the same day as trash pick up, but city officials are waiting to see just how many people sign up before they make any firm schedules.

The blue recycle cans are the same size and shape as the familiar gray garbage bins already in use around LaGrange, and will have instructions stamped on the lid about what can and can’t be recycled, Hall said. The city has already received about 600 of the cans, which are waiting for delivery at the city’s public works compound on Hill Street.

Hall estimated at first the program will cost the city about $80,000 — that’s about 0.07 percent of the city’s yearly budget of more than $110 million.

In the future, as the program picks up steam, it could become cost-neutral, he said. That depends on the market value of the recyclables, which the city plans to sell by the ton, Hall said.

“From the beginning, I’ve cautioned that this isn’t a money-making venture for the city,” he said. “This is more about a quality of life issue. It’s something that people asked for, and a lot of people wanted to see. It’s a service that people wanted.”