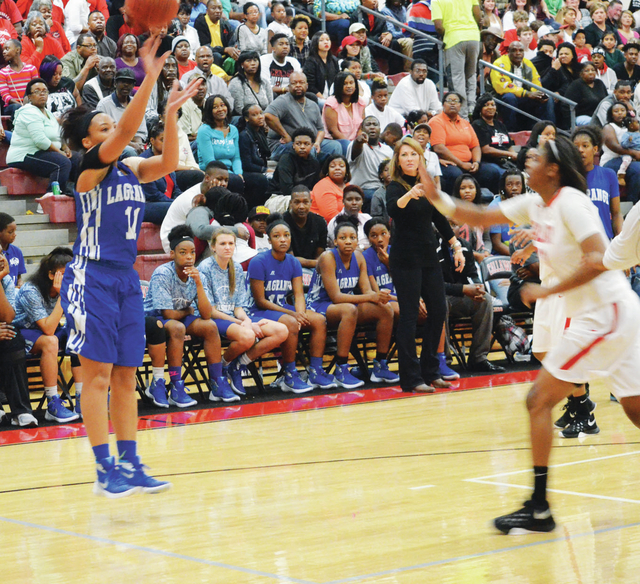 LaGrange’s Aryan Dozier gets a shot away during the second half of Saturday’s game against Callaway. Dozier made the game-winning shot and scored 22 points. Kevin Eckleberry | Daily News

http://lagrangenews.com/wp-content/uploads/sites/37/2015/12/web1_LHS19.jpgLaGrange’s Aryan Dozier gets a shot away during the second half of Saturday’s game against Callaway. Dozier made the game-winning shot and scored 22 points. Kevin Eckleberry | Daily News LaGrange’s Erica Daniel gets a shot away during Saturday’s game at Callaway. Kevin Eckleberry | Daily News

http://lagrangenews.com/wp-content/uploads/sites/37/2015/12/web1_LHS28.jpgLaGrange’s Erica Daniel gets a shot away during Saturday’s game at Callaway. Kevin Eckleberry | Daily News

HOGANSVILLE – They ran the play to perfection.

With time winding down in Saturday’s showdown between LaGrange and Callaway, it was the visiting Lady Grangers who had the ball in a tie game.

The Lady Grangers ran about 45 seconds off the clock, and Aryan Dozier ended up with the ball in her hands.

Dozier drove, and she scored with 15 seconds left to give the Lady Grangers a two-point lead, and they went on to claim a 51-48 victory to improve to 6-1.

“That’s normally what we run when we’re in a stall,” LaGrange head coach Jan Fendley said. “We also practice it to score. I was very pleased we were able to execute it. For us to be able to run some clock, score the basket, and be able to get back and get a stop was huge for us.”

That was part of a big game for Dozier, a sophomore guard who led all scorers with 22 points.

Shania Woodard added 18 points and was 6-of-8 from the free-throw line, and Chnairiea Strozier contributed nine points.

Callaway led by three points with less than four minutes to play, but it was LaGrange making the plays it needed to late to secure the win.

“Adversity hit, and we were able to come back, so that was a big deal,” Fendley said. “We hit some free throws down the stretch, too.”

For Callaway, it was an encouraging effort.

The Lady Cavaliers are 0-3, but head coach Deyano Martin was pleased with how his team competed the whole way.

“I thought they played really, really hard,” Martin said. “They stuck to the game plan to the very end. They started getting away from it a little bit late, but as far as effort, it was awesome. I’m very proud of the effort.”

Callaway fought back in the third period, outscoring LaGrange 12-9 to get within six as the final quarter began.

After falling behind by eight points, Callaway went on a 7-0 run that was capped by a three-point play by Cameron, and LaGrange’s lead was just one with 5:08 to play.

Moments later, Callaway had the lead.

Cameron pulled down an offensive rebound, and she scored to give Callaway a 41-40 lead with 4:30 to play.

After Woodard’s basket put LaGrange back ahead, Cameron scored again, and the Lady Cavaliers led 43-42.

Ki Ki Owens then made two free throws to give Callaway a three-point lead.

Back came LaGrange, which went on a 6-0 run to go up 48-45, but KeKe Talley knocked down a 3-pointer with two minutes to play to pull Callaway even.

It remained tied at 48-48 until Dozier drove to the basket and laid the ball in to give the Lady Grangers the lead, this time for good.

“We’re still not playing our best ball,” Fendley said. “We’ve got to get better. But I told them, Callaway’s much-improved. He’s doing a great job with them. We’ve just got to do some things to keep it going.”

Martin said it was LaGrange’s ability to make plays in the closing moments that made the difference.

“We made a few turnovers at the end, had a few rushed shots here or there, but I’ve got to give (LaGrange) credit,” Martin said. “They played hard the whole time, they made plays, they knocked down some big free throws.”