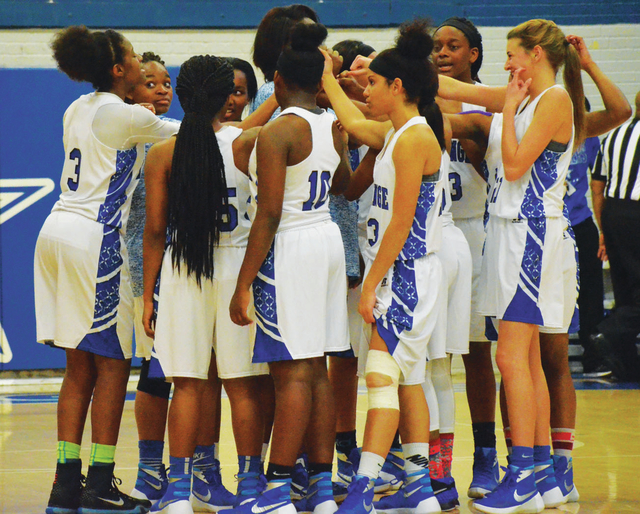 LaGrange’s Quez Jackson gets a shot away during Saturday’s game against Callaway. Kevin Eckleberry | Daily News

http://lagrangenews.com/wp-content/uploads/sites/37/2015/12/web1_LHS41.jpgLaGrange’s Quez Jackson gets a shot away during Saturday’s game against Callaway. Kevin Eckleberry | Daily News HOGANSVILLE – It was showtime for the LaGrange Grangers.

Leading by five points late in Saturday’s showdown with the Callaway Cavaliers, the Grangers were running a fast break when LaPerion Perry lobbed a pass skyward toward his teammnate, Derieko Smith.

Smith went airborne, he caught the ball, and he slammed it home to complete the alley-oop, and the Grangers led 72-65 with less than two minutes remaining.

The Grangers carried the momentum of that play to an 80-68 victory to improve to 6-0 on the season.

The two teams will get together again on Tuesday, this time at LaGrange High.

LaGrange was leading 70-65 when Kenan Gray blocked a shot, and the ball ended up in the hands of Perry, who raced down the court with Smith running right with him.

“I asked for it at halfcourt, and he threw it up,” Smith said.

It was a perfectly executed pass by Perry, and Smith elevated and powered the ball through the basket, and the Grangers were up by seven.

There was still plenty of time remaining, but momentum was all on the Grangers’ side, and they didn’t look back.

That play was part of a dominant closing stretch for the Grangers.

It was a three-point game with three minutes to play, but the Grangers outscored the Cavaliers 12-3 the rest of the way to win going away.

“We made some mistakes, and we missed too many shots, layups, free throws, everything,” Callaway head coach Terry Hayes said. “You’ve got to put the ball in the basket. LaGrange did. Give LaGrange credit. They whipped our behinds. They took it to us.”

Smith, a senior guard, had a monster game for the Grangers.

He scored 31 points, and he was nearly perfect from the free-throw line, making 13 of his 14 attempts.

Perry, who missed the first three games of the season while recovering from an injury suffered while playing football, added 19 points, and he was 9-of-12 from the free-throw line.

Gray, a sophomore who provided a formidable presence inside, added 10 points.

For Callaway, Braylon Sanders had 14 points in the second period on the way to a 20-point night, and Dre Martin added 17 points.

Joe Brown, after scoring just two points in the first half, also finished with 17 points for Callaway.

“It’s a big win in a big atmosphere, and we can enjoy it for tonight,” Callaway head coach Mark Veal said. “They’ve got a very good team. They’ve got good players, and Terry does a good job with them. They play hard. They adjusted well. And now we’ve got to come back and play them Tuesday night.”

The game was tied 11-11 after the first period, and both teams picked up the pace offensively in the second quarter.

Smith exploded for 14 points in the second period, and the Grangers scored 29 points in the quarter to build a 38-30 lead at the half.

The Cavaliers led 47-46 in the second quarter after an Ernest Patillo basket, and Smith answered with a 3-pointer to put his team up by two.

The Grangers finished the first half on a 9-2 run to take an eight-point lead.

Perry began the second half with a 3-pointer, and the Grangers were up 41-30, which was their biggest lead of the game.

Back came the Cavaliers, who went on an 13-2 run to tie it, with Brown scoring seven points during that stretch.

With the game deadlocked at 43-43, senior guard Alex Dantzler knocked down a 3-pointer to give LaGrange a 46-43 lead.

Then with 3:18 left in the third period, Patillo scored, and the Cavaliers had a one-point lead.

Smith responded with a 3-pointer to give the Grangers a lead they wouldn’t relinquish, although it remained close most of the way.

The Cavaliers, who trailed 56-52 after three quarters, got within one with 5:30 to play.

Martin scored with three minutes left to get the Cavaliers within three, but the Grangers dominated the rest of the game to secure the rivalry win.

“That fourth quarter, they had layup after layup,” Hayes said. “We’ll be better Tuesday.”