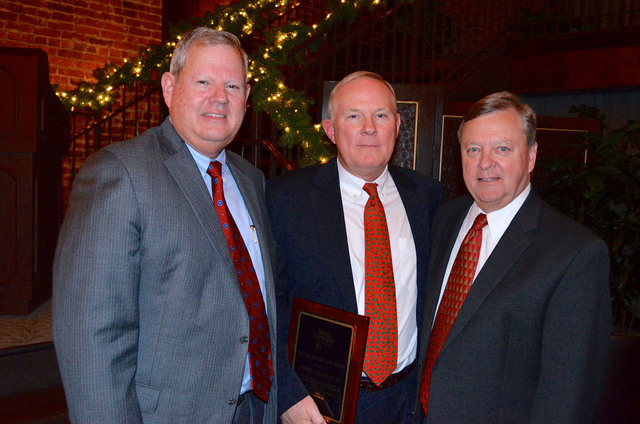 http://lagrangenews.com/wp-content/uploads/sites/37/2015/12/web1_Coggins_PhysicianOfTheYear_15.jpgDr. Robert Coggins, center, receives the Physician of the Year for West Georgia Health during a ceremony at Del’Avant. He is flanked by West Georgia Health board treasurer Speer Burdette, left, and WGH President and CEO Jerry Fulks.

LaGRANGE — Dr. Robert Coggins, who has served the community for almost 25 years as a gastroenterologist, has been honored as West Georgia Health’s 2015 Physician of the Year.

The award, given annually since 2007, recognizes an outstanding physician whose contributions have made a significant impact on patient care, the medical staff and West Georgia Health.

“This year, we received several nominations for Physician of the year, and I understand that all the nominees were excellent candidates,” said Speer Burdette, treasurer of the West Georgia Medical Center Board of Trustees, as he announced Dr. Coggins’ selection as Physician of the Year. “However, they did agree on one exceptional recipient and noted several of his attributes, including ‘He is pleasant when you see him in the hallways,’ ‘His bedside manner is wonderful,’ and ‘He is committed to both this community and to West Georgia Heath.’”

He had previously completed his residency at Ochsner Foundation Hospital in New Orleans, La., and earned his Doctor of Medicine degree at Vanderbilt University School of Medicine in Nashville, Tenn.

“Dr. Coggins is the ninth physician we have honored as Physician of the Year, and he joins a group of doctors who go above and beyond in their profession and in their community,” said Jerry Fulks, WGH’s president and CEO. “He is the consummate professional who is an unwavering advocate of patient safety and quality care.”

During Dr. Coggins’ tenure at West Georgia Health, he has served on the WGH Board of Trustees, the Medical Executive Staff Committee and was selected twice to serve as president of the medical staff. He has been a member of the Performance Improvement Committee for more than 10 years and has served as its chair for three years.

An anonymous selection committee composed of a multidisciplinary team of West Georgia Health employees reviews the blind nominations for the honor.

One of Dr. Coggins’ colleagues who nominated him said Dr. Coggins is also his personal physician.

“I have personally been under his care, and I have also observed him take excellent care of patients at West Georgia Health,” he wrote in the nomination. “In fact, he has taken care of several of my friends and family members. In every case, they have spoken of the outstanding care he has given them. He spends the necessary time to answer questions and talk about any issues his patients may have, but he’s also efficient with his time and always mindful that he has other patients waiting for him.”

Another nominator said of Dr. Coggins: “We are fortunate to have many great physicians in LaGrange and Troup County. There are a number of them who you interact with and wonder, ‘How in the heck did we get them to come to LaGrange?’ My nominee for Physician of the Year is one of them.”