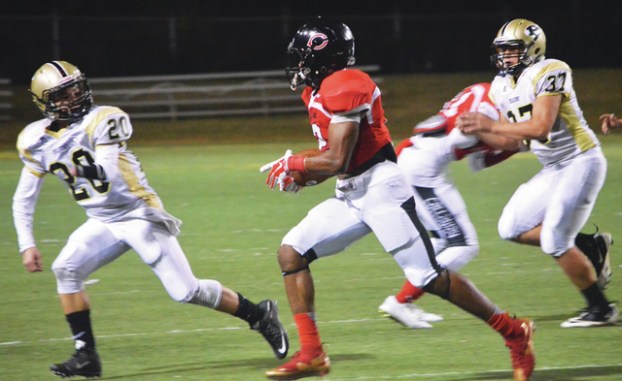 Players for Callaway and LaGrange chase down a loose ball during Tuesday’s game. Callaway rallied from a 15-point halftime deficit to win 47-42. Kevin Eckleberry | Daily News

http://lagrangenews.com/wp-content/uploads/sites/37/2015/12/web1_CHS112.jpgPlayers for Callaway and LaGrange chase down a loose ball during Tuesday’s game. Callaway rallied from a 15-point halftime deficit to win 47-42. Kevin Eckleberry | Daily News LAGRANGE – The first half was all LaGrange.

When Chnairiea Strozier banked in a 3-pointer as the first half ended, the LaGrange Lady Grangers were holding a seemingly comfortable 29-14 lead over the visiting Callaway Lady Cavaliers.

Callaway head coach Deyano Martin’s message to his players during the halftime break was to forget about the score, and just come out and play better.

“I just told them to play our game, and we’ll get back into the game,” Martin said. “Don’t worry about the scoreboard. Don’t play the score, play the game, and I’ll be right there with you every step of the way. I’ll try to help you, tell you what to do a little bit, but you’ve got to make plays.”

The Lady Cavaliers staged a furious comeback in the second half, and they ended up pulling off a 47-42 road win to get their first victory of the season after three losses.

“I told them just play the game, and eventually you’ll look up and it’ll be a tie ballgame,” Martin said. “And it happened.”

It was a tie game with less than 30 seconds to play, and it was LaGrange walking away with a 51-48 victory.

Four days later, those same two teams were embroiled in another close game, and this time it was Callaway making the winning plays in the closing moments.

“I think we grew up last game,” Martin said. “And this game, I think we doubted ourselves for the first few minutes, and I think we got it back.”

It was a tough loss for the Lady Grangers, who seemed to be in control at the half, but they were unable to maintain that momentum in the final two quarters.

“I don’t think we relaxed at all, they just made adjustments, and we didn’t do well with those adjustments,” LaGrange coach Jan Fendley said. “So we’ve got to go back and do better.”

Senior guard Zamari Hardnett paced Callaway with 18 points, and Alexus Scott added 14 points, with six of those points coming during the fourth period.

Ki Ki Owens, who finished with 10 points, came up big at the free-throw line for Callaway.

The junior guard was 10-of-14 from the free-throw line, and she made five free throws in a row in the fourth period.

LaGrange got 16 points from Aryan Dozier, and Shania Woodard and Chnairiea Strozier each scored eight points.

While Owens was clutch from the free-throw line late, LaGrange’s players were just 3-of-12 from the line in the fourth period.

At one point, the Lady Grangers shot six free throws in a span of just a couple of seconds, but they only made one of them.

Twice after a missed free throw a LaGrange player pulled down an offensive rebound and got fouled, but that good work on the boards didn’t translate into points.

“They had the points in the paint when they needed them,” Fendley said. “And their guard (Owens), she was 5-of-6 in the last minute. We shot six free throws, and we made one. You’ve got to finish.”

Early on, it was Callaway having trouble finishing.

With Dozier scoring seven points, LaGrange surged to a 13-3 lead after the first period.

The Lady Cavaliers picked up the pace in the second period, but they still found themselves trailing by 15 at the half when Strozier connected from long range at the buzzer.

Callaway began to creep its way back into the game in the third period.

When Hardnett made two free throws with 1:23 left in the third quarter, LaGrange’s lead was down to 31-26.

The Lady Grangers recovered and led 35-28 by the time the quarter ended, but the Lady Cavaliers had shaved eight points off of their deficit.

Strozier scored early in the fourth quarter to give the Lady Grangers a 37-28 lead, and they were on a 6-2 run at that point.

The lead was still eight points when Hardnett made two free throws with 6:06 to play, and Callaway was ready to take off.

With 2:40 to play, Scott pulled down an offensive rebound and scored, and Callaway led 40-39.

Woodard answered with a basket to give the Lady Grangers a one-point lead, and Erica Daniel made a free throw with 1:51 to play to push the lead to two.

In the next few moments, LaGrange misfired on five straight free throws, and Callaway got the ball back down by just two.

From there, Owens made five straight free throws to give her team a 47-42 lead with nine seconds remaining, and that was the final score.

LaGrange had its chances, but its final possessions either resulted in missed shots or turnovers.

“We didn’t have smart possessions,” Fendley said. “We’ve got to be aware of having smarter possessions down the stretch.”

After the close call a few days before, Owens said it was all about finishing.

“We just wanted to finish, and play hard,” she said. “We just hustled this game. I think we did good.”

Callaway will look to make it two in a row when it hosts Harris County on Friday.

LaGrange will be on the road against Troup on Friday.