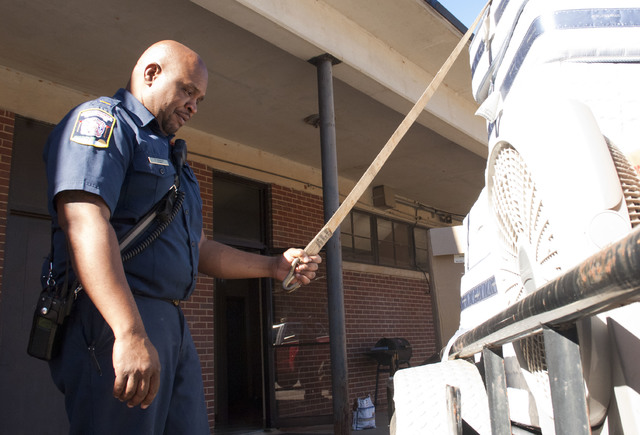 Firefighters of Station in Hogansville moved in and spent their first night in a newly renovated firehouse on East Main Street.

The 25-year-old firehouse underwent a nearly $65,000 refurbishing and included the addition of new bedrooms, bathrooms and an overhaul of the building’s exterior.

The original station consisted of one bedroom, one bathroom, a kitchen, living area and a small office. Now, each firefighter has a bedroom and closet, two bathrooms, a spacious kitchen, dining room, a living room and an office for the station’s lieutenant.

The station is staffed around the clock by three shifts of three firefighters. During the four-month renovation period, the firefighters operated out of an old health department building in Hogansville.

Moving their equipment, furniture and personal items on Tuesday, Keith Bonner, a firefighter and emergency medical technician, said he’s glad to be moving into his new digs.

“It’s going to be good,” he said. “It went from being a 25-year-old building to basically a totally new building.”

Bonner said the new feel of the fire station is a welcomed addition and he and the other firefighters were looking forward to using the newly remodeled station.

“Before the renovation, it was a little worn out,” he said. “Now, it’s really modern. It’s going to be nice to have your own bedroom and to have two bathrooms.”

He explained that when firefighters wake up in the middle of the night to go on an emergency call, it was a little difficult with three people and only one bathroom if everyone needed to use it before rushing out on a call.

The firefighters of Station 11 also received the newest of the county’s fire engines. The new engine — both a fire truck and an emergency rescue truck — can do what used to take two vehicles. The truck is capable of pumping 1,250 gallons of water per minute and carries about 1,000 gallons of water at a time. The truck also carries fire hoses, tools, medical equipment and extrication equipment.

The renovations and truck were paid for using special-purpose, local-option sales taxes. About $52,000 were spent on the new fire station’s structure, with an additional $12,000 used for furnishings, according to a press release from the county.

Up All Night Christmas dinner set to feed 700…