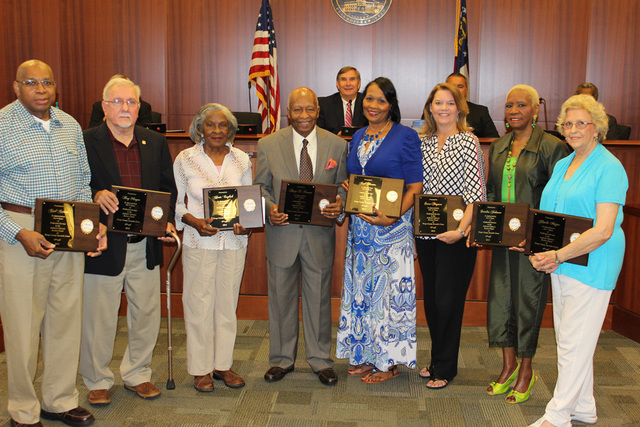 Troup County Board of Commissioners Chairman Patrick Crews on Tuesday shows an award presented to the county’s roads and engineering department for work on the Salem Road bridge over Flat Shoals Creek.

http://lagrangenews.com/wp-content/uploads/sites/37/2015/12/web1_Commission.jpgTroup County Board of Commissioners Chairman Patrick Crews on Tuesday shows an award presented to the county’s roads and engineering department for work on the Salem Road bridge over Flat Shoals Creek.

LaGRANGE — The Troup County Board of Commissioners met Tuesday for its regularly scheduled meeting at the government center on Ridley Avenue.

During the meeting, commissioners congratulated the county’s roads and engineering department employees for a recent award they received for their work overhauling the historic bridge on Salem Road over Flat Shoals Creek.

The county’s engineering staff, along with the project engineering firm Moreland Altobelli Associates, was presented the Georgia Partnership for Transportation Quality Preconstruction Design Award during the annual Georgia Transportation Summit in November in Atlanta.

“These gentlemen were tasked with the design and construction of a project to replace Troup County’s last remaining steel truss bridge at the focal point of a designated ‘scenic corridor,’” said Commission Chairman Patrick Crews. “Needless to say, the old bridge was very close to the hearts of the residents of Troup County, and a design solution for its replacement that would meet all of the needs of the community seemed at its onset like a nearly impossible task.”

Crews went on to note that while the new bridge doesn’t exactly mirror the previous structure, it still maintains the characters and scenic beauty of the area.

County roads engineer James Emery said he was proud of the work he and other county officials did to listen to the community and come up with a solution that met the project’s goals, budget and residents’ concerns.

“I believe that the greatest achievement that was honored was the achievement of listening to the community, and providing the solution that the community wanted,” Emery said. “We spent years working toward this solution, brainstorming and analyzing what seemed like an endless number of options for different concepts.

“After multiple public meetings hosted by the Pleasant Grove Church near the bridge, we ended one of the meetings with a vote on bridge design concept options,” he said. “The result of the vote was — incredibly — unanimous. If there is any part of the project that I take the most pride in, it is that.”

The payment in lieu of taxes, or PILOT, agreement would allow Powertech to pay 12.5 percent of the $40 million added property’s ad valorem tax value in 2016 and increase the percentage by 12.5 percent each year until 2022, with full tax value paid beginning in 2023. The Board of Education still needs to approve the measure and is expected to vote on it Thursday. West Point City Council approved it Monday.

The commission also approved the acceptance of two grants to fund court programs. About $20,000 in grants from the Council of Accountability Court Judges will fund drug testing and ankle monitors for the Troup County Drug/DUI Court and a second grant of slightly more than $1,000 from the Criminal Justice Coordinating Council will fund trauma therapy materials in the Felony Adult Drug Court.

A $74,000 bid from Fischer Scientific Company was accepted by commissioners as the lowest bid to purchase new self-contained breathing apparatuses for the Troup County Fire Department. The purchase will fund a partial replacement of the masks and comes after the commission earlier this year approved the purchase of new turnout gear.

The commission will not meet again this year. The next scheduled meeting is slated for Jan. 5 at 9 a.m. at the government center on Ridley Avenue.