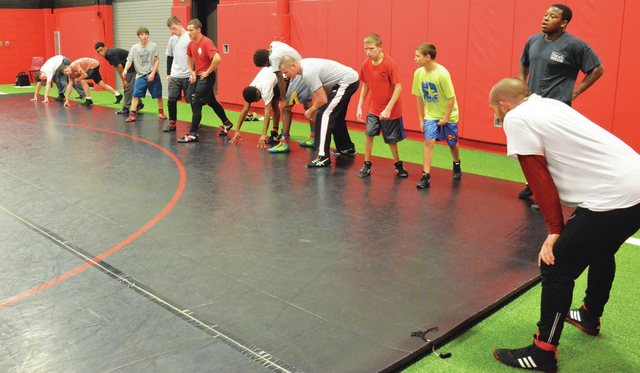 Josh Ghobadpoor gets down and does sit-ups with his wrestlers during Wednesday’s practice session. Kevin Eckleberry | Daily News

http://lagrangenews.com/wp-content/uploads/sites/37/2015/12/web1_coach3.jpgJosh Ghobadpoor gets down and does sit-ups with his wrestlers during Wednesday’s practice session. Kevin Eckleberry | Daily News Josh Ghobadpoor watches the wrestlers as they get ready to do sprints at the close of Wednesday’s practice session. Kevin Eckleberry | Daily News

http://lagrangenews.com/wp-content/uploads/sites/37/2015/12/web1_coach4.jpgJosh Ghobadpoor watches the wrestlers as they get ready to do sprints at the close of Wednesday’s practice session. Kevin Eckleberry | Daily News

HOGANSVILLE – He knows what it takes to succeed, to be a champion.

Ghobadpoor finished second in the state three times, and he won his championship during a junior season when he didn’t drop a match.

Now, Ghobadpoor is looking to pass along the knowledge that he accumulated during his days as a wrestler, both in high school and in college, and as a coach over the past five years or so.

Ghobadpoor is in his first season as Callaway High’s head wrestling coach, and the practices he runs are intense, focused, and designed to get the best out of everyone who steps into the room.

During Wednesday’s practice session that lasted more than two hours, there was plenty of drilling, sparring, conditioning, and hands-on instruction from the man who is looking to build up the Callaway wrestling program.

Whatever the wrestlers do, Ghobadpoor and the other coaches are right there with them.

“I never want to be the coach that rests on his laurels,” Ghobadpoor said. “I want to go out there, and if they don’t know what I did in high school or college, then that’s fine. But I can show them on the mat what I can do now. I think that has a big impact, and it’s a morale boost when they see me out there rolling them. It’s not just us telling them what to do, we’re experiencing it with them. When we’re tired, we know they’re tired. When they’re tired, we’re probably a little tired. So they feed off that. If we keep going, then maybe they can keep going.”

Ghobadpoor, who also coaches cross country at Callaway, has not just been a coach, he’s also been a recruiter.

When he took over as the wrestling coach during the summer, getting in touch with the returning varsity wrestlers didn’t take a whole lot of time.

“Being the new coach, it’s my first year here, and I called everybody that was on the team last year,” Ghobadpoor said. “I had to make four phone calls.”

He set out to augment the team’s numbers, and now there are 15 wrestlers on the team.

Some of them came with him from cross country, others were football players, and some returned to wrestling after some time away from the sport.

Ghobadpoor knows his team will be lacking in the experience department, so he has set out to have the best conditioned wrestlers at a given event.

“There are certain things that are in your control,” he said. “As a coach, and as a wrestler, and as an athlete, you sometimes can’t control how fast you are. You can’t control to a certain extent how strong you are. But you can always control how hard you work. That’s where the conditioning comes into play.”

Ghobadpoor said the goal is to “be the most conditioned team that we see.”

Ghobadpoor said his wrestlers have performed well late in matches, and he said his men have yet to lose in overtime.

“We’re undefeated in overtime on the year,” he said. “It’s not that we’ve had a ton of overtime matches. The point being, that’s something we can use is a positive influence. When it goes late, we get better. I think that’s a testament to how hard these guys work. I could have the best practice plan written up, and I can have all these great drills, but if they don’t want to do it, or if they’re not willing to push themselves, it doesn’t matter. So all of that goes back to the guys and their work ethic.”

Senior Andrew Thomas, one of the returning wrestlers from last season’s team, said having Ghobadpoor as the coach has made a huge impact.

“He has the knowledge, ability, and the willingness to fight with us,” Thomas said. “He sticks it out with us. When we lose, he loses with us. He’s right there by us. When we win, he wins. He’s implemented a lot of new things, self-discipline things. As much as I wish I’d had him my freshman year, I’m going to do what I’ve got with him this year. He’s an amazing coach, an amazing teacher and mentor.”

While Ghobadpoor pushes everyone on the team to the limit, he said he always strives to let them know how he appreciates their effort.

“They could be at home eating potato chips,” he said. “But instead, they make a choice. They choose to be here. Sometimes they may not want to be, but they choose to be here, and that makes them special, choosing to do the hardest thing they could possible do in high school. And not only do it, but strive to get better at it.”

Ghobadpoor said every one on this team is fully committed.

While each wrestler has to depend on himself when he’s on the mat, Ghobadpoor said the team concept is still critical.

“When we say we’re going to do something, we do it,” he said. “And everybody’s on board with that. We’re a total team right now. We win, we lose together. And we try to promote a family atmosphere, and we’re all in it together.”

In a short time, Ghobadpoor said he has seen many of the wrestlers make tremendous progress, and they have begun to see success on the mat.

“A lot of these guys, they start to work, and they start to see it happen, and they start to get a little success,” Ghobadpoor said. “I always tell these guys, when you get that first win, when you get that hand raised, it changes you. You have to work so hard just to be able to step out in the circle, let alone get a win. That’s a driving force. When you have to work this hard in practice, and then you get out there and I’ve worked this hard and this guy’s going to try to take this from me, that gives you an edge.”

Ghobadpoor said he has been looking to instill “mental toughness” in the wrestlers to go along with the physical conditioning.

A lot of what Ghobadpoor does now he learned from the men he wrestled for, including his coach at Lumpkin County, John McCrary.

McCrary was the Lumpkin County coach for more than 20 years, and his final season was also Ghobadpoor’s last one as a high-school wrestler.

“He was at the same school for 22 years, which is very, very rare,” Ghobadpoor said. “I had a very special and strong relationship with him. His last year coaching was my senior year, so we kind of went out together. I talk to him about once a month now still. He’s like a second dad to me.”

Ghobadpoor, who went on to wrestle at Dana College in Nebraska, also said he learned a lot from his middle-school coach in Lumpkin County.

Ghobadpoor can also obviously lean on his experiences he gained on the mat.

When he talks about what it takes to be a championship wrestler, he speaks from first-hand knowledge.

After finishing second in the state as a freshman and a sophomore, he broke through and won a title as a junior.

“It’s like a goal that’s almost surreal. Once you get there, you almost can’t believe you’ve reached it,” he said. “But it takes so much mental toughness and patience. It doesn’t happen overnight. Every single night, when I’d go to sleep and I’d say my prayers, I said I want to be a state champion. I said that every single day. Even those nights when I lost, the next day, I never cried about it, I just said I’ve got to be a state champion.”

Then when he became a champion, his goal was to win another title.

“When you win the state title, you hit that point and it’s great, and then it’s I’ve got to be a two-time state champion,” he said. “It’s back to work. Some people are hard-wired for that.”

He came close to making it back-to-back titles.

Ghobadpoor reached the championship match as a senior and was in great position to get the win, but it didn’t happen.

“I made one little mistake in the finals, and I lost,” he said. “I was taking the guy down, and I hit my hip. It’s just the basics of wrestling. So every time when I drill these moves, I’m not afraid to say don’t do that, because I lost a state championship that way. I can use my experiences, and my failures, to help these guys.”