Callaway wrestler hopes to go out with a bang 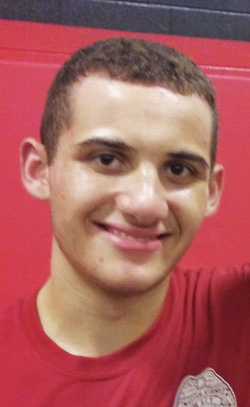 Callaway’s Andrew Thomas spars with Brandon Boddie during practice on Wednesday. Thomas is looking to make the most of his final season as a high-school wrestler. Kevin Eckleberry | Daily News

http://lagrangenews.com/wp-content/uploads/sites/37/2015/12/web1_thomas.jpgCallaway’s Andrew Thomas spars with Brandon Boddie during practice on Wednesday. Thomas is looking to make the most of his final season as a high-school wrestler. Kevin Eckleberry | Daily News HOGANSVILLE – He’s all in.

Andrew Thomas has reached his senior season on the Callaway High wrestling team, so he knows there is no next year.

This is it, so he is committed to making the most of the opportunity.

Thomas had an exceptional junior season that included a trip to the state finals, although he didn’t achieve his goal of placing and earning a spot on the podium.

Placing in the top six at state and bringing home a medal is one of the goals he has for this season, and he’s been working hard to make that a reality.

To help him make the most of his final season, he didn’t play football during the fall so he would be fully prepared for wrestling season.

It was a tough decision, but it’s one he believed in.

“I didn’t play football this year,” Thomas said at the close of a grueling practice session on Wednesday. “They had me in the rotation. I was going to get plenty of reps here and there. But it’s my last year of wrestling. I’ve been doing it for three years, been a captain for two years. It’s best for me just to stick to wrestling. I’m glad I did. No regrets there.”

Thomas is coming off a strong performance at the Chattahoochee River Wrestling Association tournament in Carrollton last weekend.

Competing in the 170-pound weight class, Thomas reached the championship match before losing to a wrestler from Hardaway.

As impressive as that showing was, Thomas wasn’t satisfied since he didn’t win.

He was back in the practice room on Monday afternoon working with his teammates and his new head coach, Josh Ghobadpoor.

Thomas said one of things Ghobadpoor stresses is that everything taking place until the area and state tournaments is just preparation.

Thomas said the objective is to be at your best when the matches mean the most.

“He tells us every day, every practice, every match, he’s like this is nothing but practice,” Thomas said. “Even the CRWA, as big as this tournament is, he looks at us all and says this is nothing but practice. Go out there and wrestle. Don’t worry about winning. Don’t worry about losing. Go out there and wrestle. This is practice. So that’s how I look at everything.”

Thomas is part of a Callaway team that had a solid showing at the CRWA tournament.

Callaway had nine varsity wrestlers, and five of them placed, including sophomore Justin Kiss, who won the championship at 113 pounds.

Matthew Wingate, a sophomore who spent his freshman season at Troup High, had a third-place showing at 152 pounds.

After losing in the semifinals, Wingate earned a dramatic win in the third-place match.

Trailing 9-1 in the third period, Wingate pulled off the pin to get the win.

“Matthew the other day, he was down 9-1, against the Alexander guy,” Ghobadpoor said. “He threw a headlock. He caught the guy. He had to be in the right posisition. He had to have the thought process to be able to hit that. He did it.”

Liranzo, a cross-country standout, wrestled through his sophomore season, but he wasn’t on the team as a junior.

With the encouragement of Ghobadpoor, who also coached cross country, Liranzo decided to rejoin the team for his senior season.

“If it wasn’t for coach Ghobadpoor, I wouldn’t even be wrestling,” Liranzo said. “He has made that much of an impact. He is definitely one of the best coaches I have ever had.”

Callaway will be back in action this weekend at the Hardaway Invitational in Columbus.