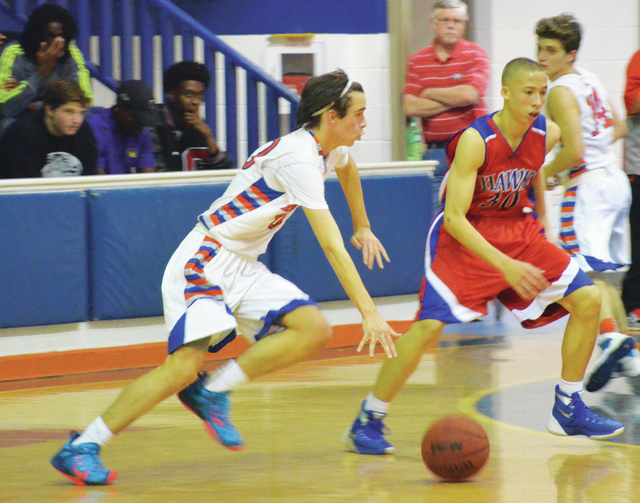 LAGRANGE – Momentum can switch sides in a hurry.

After finishing the first half on a 10-0 run to grab a 27-24 lead, the LaGrange Academy Warriors found themselves up by five points early in the second half of Thursday’s home game against Heritage.

A talented Heritage team was about to take control, though.

It was the final game of the year for LaGrange Academy, which won’t play again until Jan. 5 when it visits Heritage.

Despite Thursday’s loss, it has been a successful season so far for the Warriors, who are 7-3.

“Last year, we started off completely different,” said senior Zach Callaghan, who made four 3-pointers and scored 12 points during Thursday’s game. “I think we were 3-7, and we ended up turning it around. It’s a good start to the year, and there’s definitely room for improvement, too.”

The Warriors have played a challenging schedule, which head coach Britt Gaylor feels is extremely helpful.

“We’ve played 10 games, and it’s been a grind,” Gaylor said. “We wanted to schedule tough teams early and learn about ourselves.”

When things started going wrong in the third quarter against Heritage, LaGrange Academy had some turnovers that turned into points on the other end.

“That stretch late third quarter and early fourth quarter, we had four or five (turnovers) that killed us,” Gaylor said. “That’s something we work on every day, and we’ll have to get better at.”

Twice in the first half the Warriors fought back from a fairly sizable deficit to get back in it.

In the first period, the Warriors were down big, but they ended up pulling even at 11-11 when Nick Keating made a 3-pointer.

In the second quarter, LaGrange Academy was trailing by seven points with 3:30 left in the half.

Anderson, who had been on the bench for a few minutes, returned to the game and scored back-to-back baskets to get the Warriors within three.

Mason Brown hit a 3-pointer to tie the game, and with moments left in the half, Callaghan connected from long range to cap a 10-0 run and give the Warriors a three-point lead at the break.

Moments into the second half, Anderson scored again, and the Warriors were on top 29-24.

For the rest of the third quarter, though, LaGrange Academy only managed three more points, and Heritage School was up by nine as the final period began.

The Warriors got within seven points four times in the fourth quarter, but they couldn’t draw any closer.

Lance Terry answered with a 3-pointer on the other end to give the Hawks a 10-point lead, and they led by at least eight points the rest of the way.

The Warriors got within eight when Moreman made two free throws with 2:32 to play, but the Hawks scored the game’s final five points.

Terry had a 30-point night for the Hawks, and he scored 13 of his team’s 21 points in the fourth quarter.

“He’s a player. He’s good,” Gaylor said. “And they’re a good team. They’re well-coached. And they did a good job executing.”

As for his team, Gaylor said the night was a learning experience.