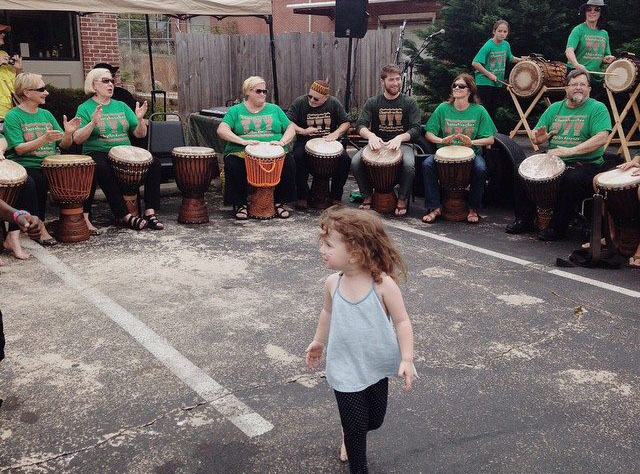 Evelyn Hendrix dances in front of the Chattahoochee Rhythm Keepers during the 2015 Hillside Arts, Music and Food Festival.

http://lagrangenews.com/wp-content/uploads/sites/37/2015/12/web1_HillsideArts.jpgEvelyn Hendrix dances in front of the Chattahoochee Rhythm Keepers during the 2015 Hillside Arts, Music and Food Festival.

LaGRANGE — The organizers of the Hillside Arts, Music and Food Festival slated for April are looking for creative people — not just for their festival, but to design a logo for the event.

The contest, which is open to the public through Jan. 15, includes a prize of $400 and the winning logo will be used on T-shirts, social media and promotional materials, according to Ben Wheeler, an organizer of the festival.

“Primarily it’s going to be used for the festival,” Wheeler said. “But if it’s something we can use across the whole spectrum of Hillside, we would love it. The reason we’re doing the contest is to generate some interest in the festival, we want to make it more community centered.”

The festival’s organizers are encouraging graphic designers and artisans to submit designs, preferably PDF formats, Wheeler said. Designs must be submitted by email to hillsideneighbor@gmail.com. Questions can be directed by email.

Wheeler said some possible ideas for the logo could include Doc Spier’s Gathering Place at 610 Jefferson St., mill village homes, front porches and trees. He also noted the neighborhood is turning 100 years old this year.

In its second year, the Hillside festival showcases local artistic talent and the organizers hope it will show the strength and resilient future of the historic neighborhood, Wheeler said.

He hopes the festival will promote partnerships between residents, public agencies and private corporations that lead to further reinvestment in the community.

Last year, more than 600 people turned out for the festival, which featured arts, crafts and live music.

“One of the highlights last year was the (drumming group) Chattahoochee Rhythm Keepers,” Wheeler said. “Families and kids were just really involved and were dancing around … it really had that sense of community.”

This year’s event will also include a 5K race sponsored by Kia Motors Manufacturing Georgia.

“Somebody said last year, there’s a real sense of community,” Wheeler said. “It goes into all the different spectrums of talent in our community of LaGrange and Troup County. We try to find representation from all walks of life and a wide array of artists. Last year, for a lot of our artists, it was their first time coming to a festival.”

Booths are available for vendors rent at a cost of $20, Wheeler said. Email hillsideneighbor@gmail.com for information and registration forms. The festival is being organized by the affordable housing nonprofit DASH with volunteers from the community.