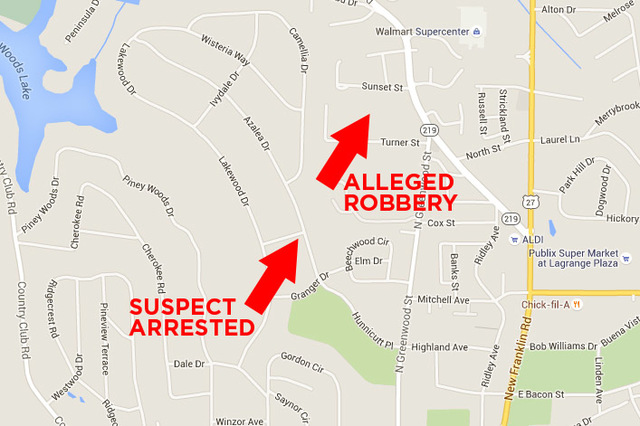 LaGrange police officers gather in the 700 block of Azalea Drive on Thursday after taking a suspect into custody who allegedly tried to rob an apartment complex worker at gunpoint.

http://lagrangenews.com/wp-content/uploads/sites/37/2015/12/web1_ArmedRobbery01WEB.jpgLaGrange police officers gather in the 700 block of Azalea Drive on Thursday after taking a suspect into custody who allegedly tried to rob an apartment complex worker at gunpoint. LaGRANGE — A local man was arrested Thursday for allegedly trying to rob a maintenance worker at gunpoint in an apartment complex on Turner Street.

Joe Weldon, 20, of LaGrange, faces charges of attempted armed robbery and aggravated assault after police say he pointed a gun at a man who was working at the Tall Pines apartments about 11:20 a.m. Police said Weldon brandished a pistol from his waistband before telling the victim to “give it up.”

No one was hurt in the incident and police said Weldon fled empty handed. Officers caught him a short time later in the 700 block of Azalea Drive.

Police believe two other individuals, described only as African-American males, were involved in the robbery attempt and remain at large.

The incident happened shortly after 11 a.m. outside the the D building of the Tall Pines apartments at 150 Turner St., according to police. The victim told police three men approached him in a breezeway before Weldon allegedly pulled out the pistol.

The victim, who police say was “in fear for his life,” ran away from his assailant and called authorities.

LaGrange Police Detective Ley Wynne said he believes Weldon fled on foot toward Sunset Street, which runs parallel to Turner Street, then hopped a fence and made his way to Camellia Drive. Weldon likely followed Camellia Drive south to Azalea Drive, where police took him into custody after setting up a search area, he said.

Police have not recovered the firearm allegedly used in the robbery attempt, Wynne confirmed.

“When he ran from the scene, he had a backpack,” Wynne said. “We recovered it between Tall Pines (apartments) and Sunset Street, but there was nothing notable in it.”

Investigators are continuing to review the incident and ask anyone in the public with information to contact LaGrange police at 706-883-2603 or Troup County Crime Stoppers at 706-812-1000.