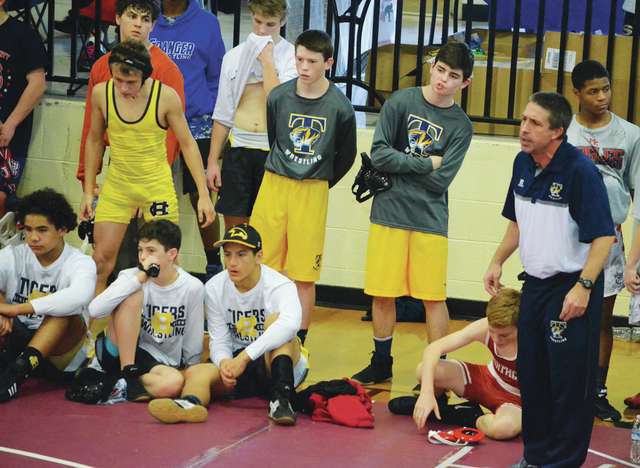 The Troup wrestling team will compete in a tournament at Whitewater High School today and Saturday. Kevin Eckleberry | Daily News

LAGRANGE – After a strong second-place showing at the Chattahoochee River Wrestling Association tournament last weekend, the Troup Tigers will be back it today for the start of the two-day Wildcat Brawl at Whitewater High School in Fayetteville.

The LaGrange and Callaway wrestling teams, meanwhile, will be in Columbus today and Saturday for the Hardaway Invitational.

Troup, despite missing five starters, finished second out of 14 teams at the CRWA tournament, and the team had nine placers.

Leading the way for Troup were Dakota Wilson and Jeremiah McClendon, who each finished first, and Steven McClendon, Trey Harris and Byron Butts were second in their respective weight classes.

As well as the Tigers have been performing, they figure to only get stronger as some wrestlers return to the lineup and as everyone settles into their preferred weight class.

Troup will wrestle on its home floor for the first time next week.

The Dariel Daniel Grind, a dual-format tournament, will be held Tuesday and Wednesday at Troup.

Callaway and LaGrange will participate in the 39th Hardaway Invitational.

LaGrange was fourth in the CRWA tournament last weekend, and it had seven placers, including two individual champions.

Callaway will also look to build on a successful showing at the CRWA tournament.