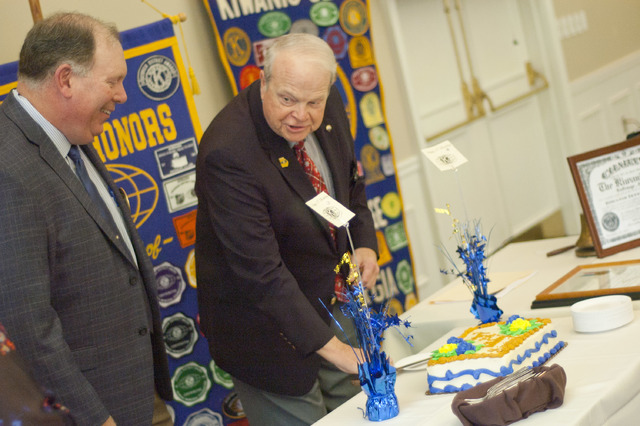 LaGRANGE — The LaGrange Kiwanis Club celebrated 75 years of the local chapter Thursday, with local leaders praising the group’s work and members celebrating its history of service.

Troup County Commission Chairman Patrick Crews and LaGrange Mayor Jim Thornton both read proclamations commending the group on the anniversary and praising the work it has done in the community.

“Whether you are a Kiwanian, a Lion or Rotarian, you are, as a member of a civic club, engaged in something bigger than your own personal business,” Thornton said during the Thursday Kiwanis meeting at Highland Country Club. “You’re trying to make a change and make a difference in your community.”

Ethyl Ault, a longtime educator and former assistant school superintendent, was the third woman to join the club when she was invited in 1992 and now the longest active female member. She took the podium as keynote speaker for the anniversary event, discussing “who we are and what we want to be.”

“‘I want you think about this saying … ‘The best things in life are all the people you love, the places you’ve seen and the memories you’ve made along the way,’” Ault told the group. “Think of all the memories you have of Kiwanis. Think of all our lunches. Think of our pancake breakfast. … We’re on our feet for four to five hours, but by 11:30-12 o’clock, we’re still there cleaning and still laughing.”

Ault said there are many things for members to be proud of. She also noted how an honor she received from the club deeply touched her.

“One thing I want to publicly thank you all for, two years ago, you honored me with the (George F.) Hixson (Fellow) award. you don’t know how much that meant to me,” Ault said as she teared up and her voice began to waver. “As a teacher, many times we don’t get thank yous.”

Ault, who served as president of Twin Cedars Youth and Family Services for seven years, focused on the work Kiwanis does to benefit children.

“I remember these things, how we touched youngsters in a very helping, caring way — in a fatherly way, in a motherly way, in a sisterly way,” she said. “We don’t look at kids and say to them, “You’re poor so we have to take care of you,’ we look at these kids an say, ‘You’re leaders … no matter where you come from.’”

The community does need to help lift up its youth, she noted. With projects like the club’s annual pancake breakfast, which raises $6,000 to $7,000 each year for scholarships, art show, birthday parties for residents of Twin Fountains Nursing Home and former talent show, the club has made itself active in the community.

She also touted how various service organizations in town work together, despite some friendly competition and teasing.

“But when it comes down to it, there would not be person who would not step up to help a child in this community,” Ault said. “… What if there weren’t people in town like you who helped build Twin Ceders?”

She asked members to think what they will do next year and what they want Kiwanis to be.

Referring back to her experience at youth services organization, which has two buildings that bear her name, she talked about the tragic stories of abuse and even murder of children that makes national news. Despite what many may think, horrific cases do happen in Troup County, she said. However, she said the work of advocates like those in Kiwanis help victims recover and prevent abusers from hurting others.

“Men and women who are diligent enough to care about children and to love them, and to go the extra mile. That’s who you are as Kiwanis,” she told the members.