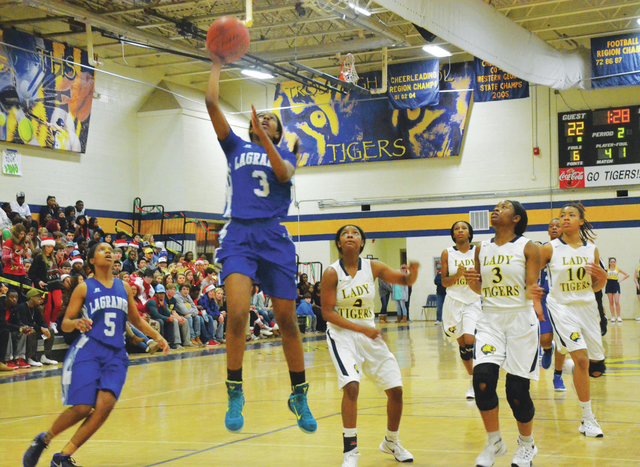 After leading by as many as nine points in the fourth quarter, the Troup Lady Tigers were only up by three points against LaGrange with more than 30 seconds to play.

The Lady Tigers weren’t going to let this game slip out of their grasp, though.

Kiya Fulton made a pair of clutch free throws with 28 seconds left to push the lead back to five, and Troup’s defense made a couple of stops in the closing moments to preserve a 61-56 victory.

“It was big, especially in this type of environment,” Troup head coach Carla Thornton said. “I told them you’re young, but it’s time to grow up now.”

Thornton felt the contributions made by so many different players was the difference.

“We felt we were a better team,” Thornton said. “I trust all my girls to go out there and get it done.”

One of those young players, sophomore Shaqoya Gilbert, led Troup with 21 points, and Kwyneshia Spence added 17 points, and she made two critical 3-pointers in the fourth quarter.

Akhya Mitchell added 10 points, and Fulton scored eight points, and she was 4-of-6 from the free-throw line.

LaGrange sophomore Aryan Dozier had a big night with 26 points, and she had nine points in the fourth period to help her team stay in the game.

Dozier, Strozier and Woodward were the only three players that scored for LaGrange.

“We didn’t give up,” LaGrange head coach Jan Jones said. “We fought back and got within three, and we were right there.”

Jones said Troup’s ability to knock down 3-pointers was a key to the game.

While LaGrange made one 3-pointer, Troup converted seven shots from long range.

“I think the biggest difference is, they hit the long shots,” Jones said. “They hit several long shots, and we couldn’t.”

Troup threatened to blow the game open in the third quarter.

When Fulton completed a three-point play with 2:21 left in the third period, Troup had a 44-32 lead, and that cushion grew to 14 moments later when Gilbert scored.

A 7-0 run to start the fourth period cut Troup’s lead to three, and there was still six minutes left in the game.

Spence answered with a 3-pointer for Troup to push the lead back to six, and she made another shot from long range to give her team a 54-47 advantage with 3:50 to play.

The Lady Tigers extended the lead to nine points on a Gilbert basket, but the Lady Grangers had one final push in them.

When Strozier made a 3-pointer with 33 seconds to play, Troup’s lead was just three points.

LaGrange fouled Fulton, who stepped to the line and made both attempts, and Troup was ahead by five.

This time the Lady Grangers were unable to answer, and Fulton clinched the victory when she came up with a steal with less than five seconds to play.